Exercise classes where children are the teachers 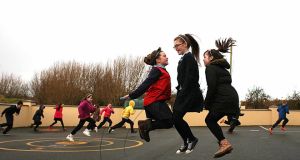 The pupils of Lisacul National School, Castlerea, Co Roscommon, go through their exercise drill in the playground. Photograph: Brian Farrell

Schools sometimes complain that too much is expected of them in trying to combat society’s ills, such as over-eating and under-exercising. But give pupils the chance and they can come up with peer-led initiatives that are far more effective than anything teachers might do.

Take Our Lady’s Abbey in Adare, Co Limerick, an all-girls primary school, where every break time its outside play area is buzzing with Yard Leagues for third to sixth class and Yard Zones for the younger children – all refereed and supervised by “play leaders” drawn from among the pupils.

Each class is timetabled to rotate through different activities, which range over the term from skipping, penalty shoot-outs and hockey box to hula hoops, netball and agility stations.

“It is a fantastic feeling down in the yard,” says teacher Trisha Lavin, who selects teams for the leagues, to ensure they are of mixed ability. “Nobody is allowed to say they are not playing.”

It was the first school in Ireland to achieve a second “Active Flag”, in a scheme funded by the Department of Education. That was in 2013 and it is now working towards getting its third flag this year.

“We’re an all-girls school and very much about girls being active and sporty,” adds Lavin.

However, research shows that after girls leave primary school, there is a marked drop-off in participation in sport. It is something that six transition year students in Beara Community School, Co Cork, decided to tackle with a “Feel Good Fitness” project for the Young Social Innovator programme.

As one of the six, Mary Kate Harrington (16), explains, she now realises her experience of dropping out of sport is fairly typical. Even peers who continued playing for teams said they played less.

In primary school Mary Kate did gymnastics, dancing, football, hip-hop and ballet. In first year at secondary school, she still had an activity every day after school.

“Then the homework would be mounting up and there was too much to deal with,” she says. By second year, she had more or less given up all sport.

“It is really bad – it affects your school work. We wanted to make girls aware of this trend,” – especially the first years, to encourage them to find a way to keep going with sport.

The community is “GAA to the core”, she says, “so we were trying to get other sports like gymnastics that people do like but don’t get the opportunity [to do], like zumba”. The school runs Gaelic football and basketball for the girls, along with cross-country running, which is quite competitive.

“Competition is a great thing for people to get involved, to strive towards goals,” says Mary Kate. “But I think there are so many more people who don’t want to go to a competitive level with a sport; they just want something they can do to enjoy in their spare time.

“That is what our weekly sessions are about,” adds Mary Kate who, along with fellow project members Amy O Sullivan, Shauna Doellken O’Shea, Clodagh O’ Sullivan, Natasha Lyne and Karen Crowley, has been delighted with the response. Between 30 and 40 students have taken part in each workshop.

This month, they will ask participants to nominate their favourite, with the intention of continuing weekly sessions of the most popular one, along with a walking programme for all students.

At the other end of the country, in Scoil Mhuire national school in Dristernan, Gleneely, Co Donegal, a children’s “active committee” sets nightly physical exercise homework for fellow pupils and teachers alike. They came up with a list of about 20 exercises, such as squats, sprints, sit-ups, star jumps, and so on, and pupils choose one to do each night for a fixed time and fill it in on a sheet.

“They always, naturally, get Irish, English and maths homework,” says principal Nicola Humphries, “but it was to get an element of PE homework. It is the kids who lead it – that is the nice part.”

The principal believes the work of the active committee has made quite a difference, especially among the younger children who may not yet be involved in any team sport.

“Some of them are used to sitting in front of the TV or a game. They are actually tired and asking to sit down when they are in the yard.

“For them it is amazing, because the active committee goes into the yard and sets up stations. It keeps them really, really active.” And there is no question of the little ones complaining they have nobody to play with.

Every Friday afternoon, members of the active committee go around each classroom, checking that a nightly exercise has been signed off by a parent and awarding stamps to those who have completed them all. “They get serious pleasure,” Humphries adds, “in correcting the teachers and other staff’s sheets!” See activeschooflag.ie