Emotional abuse case study: ‘If I had stayed longer, I probably would have ended up dead’ 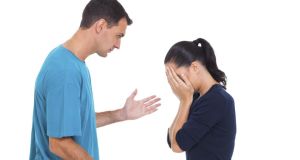 Emotional abuse is so much worse than physical abuse. A bruise heals. The inside takes longer. Photograph: Thinkstock

The beginning I used to be a girl about town. I was working in accounts, bought my first home at 22 and had my little sports car. I had my life planned out.

If he had punched me in the face on our first date, I wouldn’t have gone back. I couldn’t see what was really happening.

I got pregnant shortly after we started going out, and I was diagnosed with breast cancer the same year. I was 24. He left when all that happened, so I had my daughter by myself. I moved to Dublin for cancer treatment.

I bumped into him when I came back to Limerick. I think I was vulnerable because of my illness. I went from being confident to thinking I was going to die.

We got married less than nine months after that. The abuse started from there. It was all emotional or psychological. And it was the worst. I can’t even explain it.

It started with things like my clothes. At first he’d say, “I don’t know about those shoes.” It progressed to, “Everyone’s looking at you, and you can’t go out like that.” Eventually, it was, “You look like a slut.”

As soon as we got married, my house wasn’t right because it was mine. So I had to sell it and buy another property with the money I made. He had debts, and I paid them off. I bought another home, and everything about that was wrong as well. It was all my money, and it’s all gone now.

Our daughter would finish school, and he knew how long it took me to drive home. I’d have to be at home to answer the phone when he rang.

He cut me off from my friends. He encouraged me to work from home and then to stop working completely. Sometimes he rang me 30 times a day.

When he came home from work, I’d have his shirts ironed, but he wanted the only one left in the laundry basket. It was always the wrong shirt, the wrong food.

Then I wasn’t able to go to the doctor because he said the cancer was all in my head. He said all I wanted was for the doctor to see me naked. I didn’t have a check-up for many years, and my health deteriorated.

I finally went to the doctor and found out I had to have my ovaries removed. I had the surgery, and afterwards my husband said I did it to spite him.

I was in and out of hospital during that time. He never came to see me and wouldn’t look after our daughter. My parents, who were in their 70s, looked after her.

Towards the end, he started threatening to kill me in front of our daughter. When we got home from school, she would cross her fingers that he wouldn’t be at home. “Can we run away, Mammy?” she used to ask me every night.

One day he went ballistic, and we ran outside and drove to my parents’ house. He tried to block me and then ram my parents’ house with the jeep. I rang the police. The police told me to stay with my parents for a few days. They left the perpetrator in the house.

I actually thought it would be easier to stay with him.

I was dealing with one good garda who told me not to back down. He was the best thing that ever happened to me.

Gardaí told me to contact a domestic violence refuge. I said: “Are you crazy? I’m not one of those people. I’m not poor.”

But when I went there, I realised I totally am one of those people. I’ve met doctors and judges hiding from their abusers at the refuge. Abuse is straight across the board.

I got a barring order to remove him from the home, and I’m back in my house now. There is help out there. You can get through it, and your kids will thank you.

A lot of people think they should stay for their kids, but my daughter is a different person now. She’s a happy child. She’s in the top 2 per cent in the country in standardised testing. She’s the most mannerly and well-adjusted kid.

I left three years ago, and I still go to a support group to get him out of my head. He told me I was worthless so [many times that] I believed it.

I had a lovely childhood. We weren’t poor by any means. I was the most confident person you could ever meet, and I just vanished. I’m trying to find myself again now.

Emotional abuse is so much worse than physical abuse. A bruise heals. The inside takes longer.

This story is from a member of United & Strong, a group of domestic violence survivors advocating to strengthen the rights of victims of domestic abuse. For more information, see United & Strong on Facebook and @strong_united on Twitter.