Clean hands save lives: the simple lesson we still fail to heed after 170 years 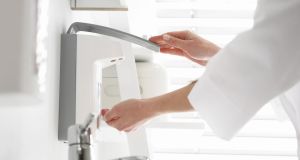 Obstetrician Ignatz Philipp Semmelweis was the first to demonstrate, by experiment, that handwashing can prevent infections.

In May, 1847, he instigated a chlorine-based handwashing regime in the labour ward of the Vienna Maternity Hospital, where monthly maternal mortality rates from puerperal fever (caused by a Streptococcus bacterium) sometimes approached 20 per cent. By June, 1847, the labour ward mortality was 1.2 per cent.

Yet, more than 170 years after this early evidence of the effect of handwashing on infection, the World Health Organisation (WHO) is still having to hold campaigns, such as “SAVE LIVES: Clean Your Hands”, to remind healthcare workers (HCWs) – and the public – that hand hygiene is central to the prevention and control of infections. And WHO data have traced an apparent continuing failure of HCWs to protect their patients.

For instance, in a review of 77 peer-reviewed articles on hand hygiene published between 1981 and 2008, the WHO stated: “Adherence of HCWs to recommended hand hygiene procedures has been reported as variable, with mean baseline rates ranging from 5 per cent to 89 per cent and an overall average of 38.7 per cent.”

What are the main barriers to HCWs’ compliance with handwashing protocols and how could they be eliminated?

Prof Colum Dunne is director of research at the University of Limerick’s Graduate Entry Medical School. He told The Irish Times: “We’ve seen that hand cleansing behaviour becomes more lax with experience. For example, nurses and doctors report better compliance and attitudes soon after becoming qualified than after several years in their jobs.”

Prof Dunne suggests that probable reasons for this fall-off in compliance could be due to seeing or experiencing, and then wanting to avoid, adverse skin conditions associated with some cleaning products; the pressures of busy clinical environments; or just forming bad habits. He also notes that there is evidence to show that repeated reminders such as posters displayed prominently, targeted education and training as part of continuous professional development are likely to help.

Last year Prof Dunne co-authored a study in the Journal of Hospital Infection investigating “Attitudes and practices of Irish hospital-based physicians towards hand hygiene and hand-rubbing using alcohol-based hand rubs: a comparison between 2007 and 2015”. It found that 86 per cent of doctors complied with hand hygiene requirements before patient contact in 2015, compared to 58 per cent in 2007; and 91 per cent were compliant after patient contact in 2015, compared to 76 per cent in 2007. However, only 39 per cent of doctors in 2015 almost always used alcohol-based hand rub (ABHR), compared with 15.5 per cent in 2007, with the researchers noting that: “Stated barriers to use included dermatology issues and poor acceptance, tolerance and poor availability of ABHR products.”

They concluded that practice remained “sub-optimal and there is scope for substantial improvement”.

But ensuring good hand hygiene is not only the responsibility of HCWs; we, as both patients and visitors, have a duty to observe good handwashing habits. “Stories regarding episodes of infection outbreaks almost always focus on hospitals,” explains Dunne. “However,” he adds, “patients and healthcare workers interact in many other places. For example, in GP and dental surgeries; with public health nurses; allied health professionals in primary care teams; ambulance crews, and staff in long-term care facilities, who meet and treat patients daily. Hand hygiene is equally relevant in all of those settings.”

Interestingly, a 2008 review by Prof Timothy Noakes and colleagues revealed an Irish dimension in their investigation of Semmelweis’s original experiments, showing that the high mortality seen at the Vienna Maternity Hospital stemmed from doctors visiting the labour ward after attending autopsies but without washing their hands.

For comparison, Noakes’s team considered mortality rates between 1784 and 1858 for the Dublin Maternity Hospital “since mortality rates did not differ significantly during this time. Obstetricians in Dublin Maternity Hospital did not perform autopsies before entering the labour wards. In addition, they washed their hands and had some understanding that disease could be contagious, although they considered other possibilities as well.”

Given this long-standing acquaintance with the virtues of handwashing, are there any aspects of hand hygiene practices in Ireland’s healthcare system that could usefully be exported? “At the University of Limerick, ” says Dunne, “we’ve focused on understanding why hand hygiene practice can be less than perfect in real-world clinical settings so that interventions can be used to overcome those barriers. We offer training and education that refreshes best practice for those working in healthcare. In addition, we’re working with colleagues in Scandinavia to compare their experiences with ours while, in Ireland, we’re evaluating hand hygiene behaviours in both hospitals and the wider healthcare community.”

The University of Limerick team believe that there is clear evidence internationally that education and training interventions improve hand hygiene practices.

“Hand hygiene,” Dunne emphasises, “is a relatively simple process of cleaning hands at the appropriate time using suitable alcohol or soap products. That simple task, performed well, can be extremely effective. Sometimes research looking for solutions can overlook that fact and focus too narrowly on elaborate technology-driven solutions.”

Almost two centuries after Semmelweis demonstrated the value of handwashing in disease prevention, Prof Dunne’s reminder of its effectiveness in this technological age shows that simplicity can also reflect sophistication.

Could coronavirus become a Sars-like illness?