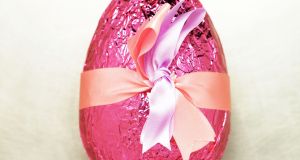 Irish children will eat their way through at least five million Easter eggs over the forthcoming holiday – lumping an extra 460 tonnes of sugar into their systems over a period of a few days, a survey for the Irish Heart Foundation has found.

The foundation is running a “Stop Targeting Kids” campaign that calls for regulation of digital marketing aimed at children and tighter broadcast rules that allow children to still see more than 1,000 junk food advertisements on television every year.

The poll of parents carried out by Empathy Research for the foundation found that children here will polish off an average of four eggs each over the Easter period, with almost one in five receiving six eggs or more.

“Easter eggs are a traditional treat and nobody is saying children shouldn’t get them,” said Janis Morrissey, head of health promotion with the Irish Heart Foundation. “The problem is overconsumption that is being driven by the pester power and temptation overload created by excessive marketing and clever promotions directed at children.”

“Children’s health is being unnecessarily compromised by companies whose sole objective is to get them to consume as much chocolate as possible.”

The foundation criticised the “incessant bombardment” of children with slick junk food advertising that has distorted the notion of what a healthy diet should be.

“All this is happening in the midst of a child obesity crisis where children as young as eight are presenting with high blood pressure and young people are showing early signs of heart disease once only seen in middle-aged men.”

Keto diet: What is it and does it actually work?
8

Turnkey Terenure home with windows on the world for €1.795m
10

50 people to watch in 2020: the best young talent in Ireland
Real news has value SUBSCRIBE