Can’t think of anything nice to say? Try the One Kind Word generator 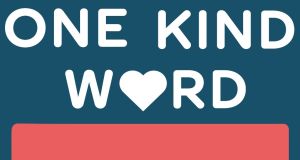 You’ve heard about random acts of kindness, those spontaneous gestures – often towards a stranger – which brighten up someone’s day.

Well, how about random kind words?

This is essentially the message behind the new online campaign One Kind Word, which encourages us all to spread a little kindness through the words we use in these unprecedented times.

Created by the 3Ts (Turn the Tide on Suicide) charity to promote mental health, the One Kind Word generator is based on the simple premise that we can change one person’s day by finding one kind word to say – both online and in real life. You can scroll through a series of kind words on their social media platforms, choose one (two or even three kind words) and use them as often as you can throughout the day. And share the screenshot of your chosen word you gave or received on your preferred social media platform.

“The campaign hopes to promote a more pronounced social consciousness of the power that kindness can have on our and others’ mental health, especially at this time,” says Breffni Burke from the 3Ts.

The campaign began when Will St Leger created the One Kind Word mural on Dublin’s Abbey Street in February, but the 3Ts charity believes that since the Covid-19 pandemic emerged, there is even a greater need to spread a little kindness.

“The animated gif is fun, easy to use and can be shared by anyone of any age, offering the opportunity to discuss the meaning and power of empathy and kindness with younger members of the family too,” adds Burke.

The charity is asking people to take part in #onekindword with the gif on Instagram @3ts_ireland Twitter @3Ts_irl and on Facebook @3tsSuicidePrevention. The campaign also aims to address people’s behaviour online and asks everyone to consider the premise of kindness before commenting on other people’s social media platforms.

The 3Ts suicide prevention charity also has online resources with information for anyone struggling with mental health issues at this time. Self -harm, alcohol dependency; anxiety, bereavement, depression, obsessions and compulsions, panic, post-traumatic stress and post-natal depression are among the topics covered.