Buying precious time by giving heart and lungs a break 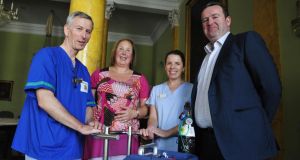 One Sunday last February, Paul Lynam was all set to go to see Ireland and England square up against each other in the rugby. But he never got to the match. Instead, he went from feeling under the weather to developing pneumonia, and within days his organs were failing and he was gravely ill. So ill that he needed to spend weeks in intensive care and months recovering.

Yet today you would never know it. Coffee in hand, the 46 year old looks hale and hearty when we meet at Dublin’s Mater Misericordiae Hospital. It’s a few months since he was here, and the clinical staff are full of smiles to see him looking so well because it’s a vastly different scenario to when they first met.

Lynam’s survival was thanks in no small part to the Mater supporting a technology called extracorporeal life support (ECLS), which takes blood out of the body, replenishes it with oxygen and then pumps it back in.

By taking over from the heart or lungs – or both – it can buy precious time for a patient where conventional support has reached its limits, explains Dr Edmund Carton, medical director of the Mater ECLS service.

Dr Carton first met Lynam as a patient who had become suddenly and seriously ill.

“I was meant to be going to the rugby game on the Sunday and I felt shivery when I woke up that morning and I thought it was the flu, so I stayed in bed,” recalls Lynam, a business executive who works in Dublin.

The next morning he still felt unwell, and Lynam’s wife, Susanne, insisted that they go to Beaumont Hospital. “We were seen to immediately and I was put on a drip and put into isolation,” he says.

Then things took a turn for the worse, though Lynam has little recollection of it. “They said they were going to sedate me and in my mind I thought yeah in 24 hours it will all be good,” he recalls. “Two weeks later I woke up in the Mater.”

Best chance
During those two weeks Lynam had been on ECLS. It was a decision that Susanne knew she had to make.

“Walking with Paul on a trolley and following the ambulance from Beaumont to the Mater, then waiting in the canteen for two hours and not knowing how things were going was not the nicest experience,” she says. “But I knew that to avoid long-term problems, this would be the best chance for him.”

In Lynam’s case the conventional supports were at their limits, and ECLS was the next option, explains Dr Carton.

Its core technology is similar to life-support machines used in heart surgery, but the ECLS machine is small and portable and it can effectively give the heart and lungs a rest for up to several weeks.

It is not without its hazards, including the potential for injury and internal bleeding, but for some cases where conventional supports are not working it can make the difference, he notes.

Before the Mater set up the ECLS service in 2009, critically ill patients from Ireland with severe lung failure had to be flown to Leicester or Stockholm to avail of the procedure.

Seeing an Irish patient being successfully treated in Stockholm in 2005 convinced Dr Carton that the Mater should develop an ECLS service.

The threat of the H1N1 pandemic in 2009 was an additional impetus and today adult patients in Ireland can be treated in the Mater’s intensive care unit.

“The new ECLS equipment is fantastic, but the hugely important component of this service is the dedication and expertise of the ICU nurses and physicians who can run this equipment minute by minute, hour after hour, day and night,” he says.

“The Mater has a comprehensive ECLS training and education programme in place.”

ECLS co-ordinator Serena O’Brien oversees ECLS education, training and assessment at the Mater, where about one-third of the nursing staff in intensive care have been trained to care for critically ill patients on ECLS.

“We have shown that we can provide the service here at less than half the cost of having patients transferred overseas,” she says.

Trained staff
For Lynam, spending nearly two weeks on ECLS under the care of trained staff got him to a point where he could start to recover.

And while it was initially painstaking, he generally went in the right direction.

“When you wake up you are like a Christmas tree with cables and tubes,” he says. “Then each time one of those was removed, it was another step. And you could literally every day see there was a little bit more I could do – I could lift my hand, I could scratch my nose, I was able to sit up in a chair and I gradually became mobile again.”

Being able to speak, drink and eat again after several weeks also gave Lynam a whole new appreciation for the basics.

“I spent six weeks dreaming about my first glass of water and there is no wine in the world that tasted as good as it did. Then moving back from the ‘astronaut food’ onto yogurt and meals; just being able to taste something for the first time in weeks was good.”

Now back at work and enjoying good health, he credits the medical staff for the care that saved his life and supported his family throughout.

“The technology is important,” he says. “But it’s the environment and people that make it work.”