Bipolar disorder: ‘If you can come out the right side of the illness nothing in life will faze you 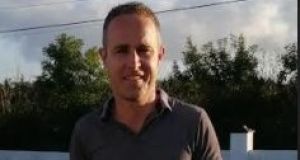 Writing a book has allowed Liam Gildea to study his illness, bipolar illness type 2, in detail. ‘It has proved to be very therapeutic and I hope it will help others understand the illness,’ he says

Liam Gildea knows only too well the importance of recognising and acting on mental health issues.

“The depressive episodes first came to the fore when I turned 16,” says the 37-year old. “I felt at the time it was just something I was going through as teenagers are moody at the best of time, but on reflection mild mania became apparent in school. As the years passed it became more evident, particularly in college in my early 20s.

“And by the time my mid-20s arrived, I was in an annual cycle of months of severe depression, followed by a few months of hypomania, after which a crash would generally arrive. I battled it out on my own for the guts of a decade before finally going to my GP to say I was depressed.”

The Mayo man sought help in 2009, but didn’t tell his GP all the feelings he was going through, so it took several years before he was finally given the diagnosis which he has been dealing with ever since. “As I was not aware that I had a bipolar illness when I presented myself to my GP – I only told him that I was very depressed and never informed him of the highs I was experiencing. I was put on medication to lift my depression and this had the desired affect, but after a few months this would lead me to a medicated high.

“For the next few years, things followed a similar pattern of me being severely depressed for about seven or eight months and then I would have about five months of being hypomanic. It wasn’t until 2013 that I got a proper diagnosis of bipolar illness type 2 and was treated accordingly.

“The mood stabiliser I was given worked very well, but I decided to come off my medication in 2014 on my own accord and this had catastrophic results, eventually leading to a year-long depressive episode. Once again, I got myself well, but again decided to reduce my medication, which lead to a horrible depression lasting 18 months.”

In 2018, Liam, who lives with his partner Joanne and their dogs, JD and Scotty, finally “took ownership” of his illnesses and began taking his medication as prescribed. This, along with several therapies, made all difference and he is now living life to the full, is in the process of writing a book about his experience, and is a facilitator for the Living Well Programme.

“I went to an outpatient psychiatric clinic in Claremorris where I received excellent treatment, which helped me to work through the psychology of learning to accept my illness, overcome the stigma and work on my value system,” he says. “I also took part in CBT and began looking at my thought patterns and becoming a watcher of my thoughts – instead of living in the hypothetical world – and talking my own truth.

“I began writing my book, Survivor, in late 2018 and this allowed me to study my illness in detail. It has proved to be very therapeutic and I hope it will help others understand the illness and know that they can live a fulfilling life. I’ve been well for over two years now and my biggest advice to anyone going through the same thing, would be to seek help as soon as possible and crucially, listen to the advice given. My life would have been a lot easier if I had tried to deal with my issue when I was a teenager. It takes bravery to seek treatment but it’s just one phone call away from a new life.

“Bipolar illness can be a great teacher – and if you can come out the right side of the illness nothing else in life will faze you. It teaches you empathy for others in pain and a newfound appreciation for life.”

“This year’s theme is ‘Move for Mental Health: Let’s Invest’ and Aware is delighted to join mental health organisations all over the world to call for greater investment in mental health from governments, workplaces and individuals in supporting their own mental health and that of their loved ones,” she says.

“Aware has seen a dramatic increase in demand for all of its services since March 2020. With an overall increase of 60 per cent in calls to our support line compared with the same period last year, with peaks of over 80 per cent in April, May and July. So it is clear that the increase in calls to Aware, along with the nature of the concerns people sought support for, are directly related to Covid-19 as the virus has impacted on all aspects of our lives.

“People who have pre-existing mental health conditions may be particularly vulnerable, but we also know that many people who were previously well will now develop mental health problems, as a direct consequence of the pandemic. So it is important to remember that while Covid-19 is a reality for us all, we are all experiencing different challenges and we have varying abilities when it comes to ‘coping’. In focusing on the challenges we each face, it is also essential to focus on how we can build our resilience to cope.”

“It can also be helpful to familiarise themselves with the supports and services available to them – for example on the Aware website we offer a host of resources on mental health and provide information on how to access our range of free support services and positive mental health programmes, all of which are free to the public,” she adds.

“Throughout this week, Aware will provide a range of free resources with the aims of improving understanding of depression and bipolar disorder and of equipping people with the knowledge and skills to look after their mental wellbeing.”

Read: Getting your head around returning to the workplace