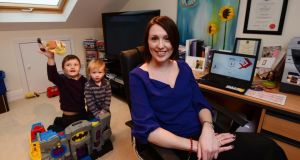 Self-employed tax and financial adviser Lorraine Cooke with her sons Daniel (5) and Jack (2) in her office at home in Stillorgan, Co Dublin. Photograph: Alan Betson

It’s said that there’s never a good time to have a baby if you think about it too much – and this is doubly true if you’re a self-employed woman running your own business.

Even if you can afford financially to take maternity leave, the chances are the business will suffer, if not dry up, during your absence.

“You can’t afford to walk away from your business for six months,” says Suzanne Healy, president of the Kildare branch of Network Ireland, an organisation supporting women in business, the professions and the arts.

“I would challenge any woman who is self-employed and says that they have walked away from it. They are fooling themselves, I would have thought.”

She, like all the self-employed women interviewed for this article, think Ireland should follow the example of the UK, among others, of allowing up to 10 “keep-in-touch” days during paid maternity leave. This means women can officially do a minimal amount of paid work during that time without being deemed to have terminated their leave and entitlement to maternity benefit.

“I think it could be a progressive step here and very useful for women who feel they need to keep in touch,” says the policy officer of the National Women’s Council, Ann Irwin. However, she cautions against a situation where an employer could pressurise an employee to come back into the workplace for days here and there.

But it also means that a woman who takes the leap into fledgling entrepreneurship from the ranks of the employed may make a huge sacrifice in forgoing the cushion of paid maternity leave, topped up by her employer to her normal income, when she wants to start or extend her family.

To qualify for State maternity benefit, which ranges from €217 to €262 a week, self-employed women must have 52 weeks of PRSI contributions paid in the relevant tax year, as opposed to a minimum of 39 weeks for an employee. And, Healy says, years of paying employee PRSI contributions count for nothing once you have stopped for a couple of years.

An HR consultant, she was an employee in Ireland for some years before going to work in Hong Kong for two years. On her return she had the choice of looking for a job or setting up on her own, and she did the latter, forming Fuze HR in 2005.

“All those years of paying PRSI contributions are completely thrown by the wayside. Nobody cares. I find that very frustrating.”

However, by the time she was pregnant with Ciaran (4) and Cormac (1), she did qualify as a self-employed woman for State maternity benefit, “but you have to go through hoops to get it”, she says.

For a start, the self-employed have to apply for it 12 weeks before the intended start date, whereas employees only have to give six weeks’ notice.

This differential, a spokeswoman for the Department of Social Protection explains, is because the insurability status of a self-employed woman “may not be readily determined and further documentation/clarification may be required from Revenue”.

Healy also thought that it was “ridiculous” that she had to promise to reach certain PRSI conditions the following year.

“That is difficult to promise at the best of times,” she says. “Salaries are subject to turnover and cash flow – you have an aspiration but there is no guarantee you will achieve it. But when you take six months out of the business . . .”

Apart from anything else, business is about relationships. “There is no question your business takes a hit when you absent yourself. You have to manage relationships – you have to keep in touch with people.

“To be able to dip in and out of work officially would be a very easy concession to be made for the self-employed.”

Unlike Scandinavian countries, where the first part of typically a year’s post-natal paid leave is assigned to the mother but can be used by the father after that, there is no system here of a woman transferring any of her paid leave to her partner.

The uptake of parental leave in Ireland is one of the lowest across OECD countries, says Irvine, because it is unpaid. Even though parental leave here was increased last month from 14 weeks to 18 weeks per child under eight, the fact that it will remain unpaid is “hugely regressive”.

Referring to the juggling of self-employment and having children as a “huge burden” on women, Irvine adds that “as a society, we should find creative ways to support women being able to spend time with their babies”.

Lorraine Cooke (33), a tax and financial adviser who runs her own company, Jigsaw Financial Solutions, had to weigh up the pros and cons of adding to her family now rather than later.

On balance she decided to go ahead, while the business is in its infancy, instead of waiting until she had built it up a bit more because she feared she would find it even more difficult to take time out then. “I think it is a very big decision to have to make,” she says. “There is never a right time.”

Expecting her third child in September, she looks back with nostalgia at the “luxury” of being able to take nine months off as an employee after the birth of her first baby, Daniel, who is nearly six. “It was gold,” she says, “to be able to enjoy it and to come and go as you pleased.”

Second time around, in 2011, it was a lot more hectic as she was studying during her pregnancy and straight after the birth, to qualify as a tax adviser. “Within a space of eight months I had a baby, qualified and set up a company.”

This time she will get the minimum maternity payment of €217 a week and her plan is to hire cover for at least a few of the first sleep-deprived months.

Although Cooke’s baby is due in the run-up to the annual tax return deadlines, there is no problem, she says, with her regular clients who know she is pregnant because their returns will be completed before she starts her leave. However, she needs somebody to look after any new clients.

Men in Ireland are two and a half times more likely than women to start their own business, according to a 2011 report from the Global Entrepreneurship Monitor (GEM).

While women being more adverse to risk-taking has undoubtedly something to do with that, the business of having babies must also be a factor.

Some 7.6 per cent of women in the workforce in Ireland were self-employed in 2010, according to a World Bank report last year.

That same year, 22 per cent of business leaders in Ireland were female, compared to an EU average of 33 per cent, say the European Commission.

Women-led small and medium business enterprises are much more prolific in the US and the fact that there is no universal entitlement to paid maternity leave is probably one reason, suggests marketing consultant Siodhna McGowan.

It is a “huge thing to give up in Ireland”, she says, having enjoyed the benefits of it herself after the birth of her first child, Theo, six years ago, when she worked for Coca Cola. It was very different when her second child, Roisin, was born 16 months ago, as McGowan started her own business, Inspired Thinking, two months later.

If McGowan, a co-founder of DigiWomen, a new support network for women setting up their own digital businesses, were to have another baby, she can’t see herself taking 26 weeks off again.

“It wouldn’t be in my DNA because you are so used to moving things on,” she says. As a self-employed woman, even if children are sick and crèche isn’t an option, “if you have a deadline, you still have to make it happen”.

‘I might be crazy’: The people who set up new businesses during Covid
9