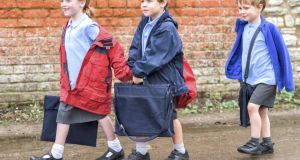 Back in the day, the aesthetics of children’s shoes left a lot to be desired – solid, sturdy footwear was the order of the day with no sympathy for anyone who wanted to wear something with even the slightest nod in the direction of the latest fashion.

But it is a whole different story today and most kids wouldn’t step outside the door in anything that resembled “sensible” footwear. Being on trend is the name of the game.

However, a new study has shown that wearing unsuitable shoes is taking its toll on children’s feet and posture as they stomp about in wedge trainers, flip flops, flat ballet pumps and the ubiquitous open-laced sneakers – all of which provide little or no support for growing feet.

The research from the College of Podiatry in the UK revealed that 22 per cent of parents feel pressurised into buying “fashionable” shoes for their children, particularly daughters, with 8 per cent of young girls regularly wearing shoes with a heel of at least 2cm from the age of six.

Dr Stewart Morrison described the findings as “worrying”, as children’s feet are more susceptible to damage than adult’s feet. “It’s really vital to ensure they are wearing shoes which fit them well – in width as well as length – and that are suitable for age, as well as the task they are wearing them for,” he says.

“Wearing the wrong size or type of shoe in the short-term causes blisters, rubbing, bruising and callouses, but in the long term it could affect foot development and result in musculoskeletal issues in the future.”

“A lot of children’s foot issues are exacerbated by footwear choice,” he says. “Soft flexible shoes with little or no support, or lack of laces, can often be a catalyst for pain or discomfort in the lower limbs as it can cause gripping with the toes in order to hold the shoe in place. This is particularly true of flip flops where the grip used in order to maintain the flip flop on the foot is often enough to cause long-term damage to the toe alignment.”

For the very young, barefoot walking,on a safe, sound, clean environment, is to be encouraged in order to help develop muscle strength and stability, he advises.  “But as children get older and walk more outside on harder surfaces, footwear becomes imperative in order to protect the foot from the risk of injury. So good advice for kids shoes are to always look for a reasonably stiff shank, flexible toe area, a small heel lift and a method of attaching the shoe to the foot such as laces or straps.

“This is important, particularly for back-to-school footwear.  Fashion may well be king, but the trend towards soft flexible footwear with open or no laces is causing untold damage to kids’ feet.”

Weir says that while children may not know that problems are arising due to their footwear, there are signs that parents can look out for.

Indications of a problem would be foot and/or leg pain when walking, redness on tops of toes and an indication of pressure inside the shoe, caused by gripping, he says.

“Pain and discomfort in the lower limb is often dismissed as growing pains, however persistent pain should always be checked by an appropriately qualified professional such as a podiatrist with experience in this area. Growing should not be painful and so-called growing pains can often be a sign of a problem.”

The Clare-based podiatrist says sport and exercise should always be encouraged but some children are going overboard and this could also cause problems – however, suitable treatment is usually possible.

“Too many kids are playing sport at a level that is detrimental to their development, both physically and mentally,” he says. “Conditions such as Severs, affecting the heel, and Osgood Schlatters, affecting the knee, are frequently seen when the level of sporting activity is not optimum – so rest days from structured training regimes are important for children.

“Treatment includes exercises, strength and conditioning regimes and insoles which encourage a more efficient weight transfer through the foot. Occasionally, the condition may warrant referral to an orthopaedic surgeon for appraisal. But suitably trained podiatrists should be the first point of contact for concerned parents.”

“At the moment young girls are wearing mostly single-strap Mary Jane type shoes with a good lot of bling,” he says. “However there is a move towards the more traditional styles in plain colours as influenced by the British royals – and ankle boots are going to be big this autumn.

“Older girls are still wearing Dubarry/Dubes and AV8, while city girls want college loafers to fit in with school rules. Teenage boys in urban areas are also wearing dressier shoes for school but overall they go for a more casual look with many wearing cross-trainers and athletic shoes.

“But no matter what they are wearing, fitting is vital, particularly in early school years as it sets up strong feet for future years where fashion will dominate over fit. So if you want shoes to last and not cause blisters, it’s important to go to a qualified fitter.”

“As your child grows so does their feet,” she says. “They can grow anything up to two whole sizes a year until the age of five, so it’s very important to get them measured and fitted correctly. And as your child is predominantly wearing school shoes for eight hours a day, it is vital to have the fit right.”

Other findings from the UK study include: 40 per cent of parents have put off buying new shoes for their children, even if they complain about feeling pain and 34 per cent say they cannot afford the expense. Some 38 per cent of parents pass down shoes to young children from older siblings without checking to see if they fit properly.