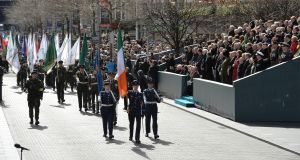 The 1916 story shows us that men and women who can make astonishing things happen can also vary astonishingly in their own personal characteristics. Photograph: Charles McQuillan/Getty Images

Homoerotic tendencies, baby talk and poetry are not generally considered to be attributes of the tough guy, “real man” persona with which males have often been saddled.

But you could have applied some of the above characteristics to some of the men who lit the fuse in 1916. Which leads me to speculate that perhaps the commemoration which reached its zenith at Easter but is still ongoing just might deepen and broaden our concept of manhood.

The conclusion that Patrick Pearse had homoerotic tendencies was reached by Dr Elaine Sisson in her book Pearse’s Patriots – St Enda’s and The Cult of Boyhood.

In the context in which she uses it, the term homoerotic can mean finding members of the same sex desirable but without ever necessarily acting on that feeling.

Some of Pearse’s writings suggest that he did indeed have such tendencies and there is no evidence that he ever acted on them.

Then there’s the baby talk. Pearse and his brother Willie were very close and even as adults used a private language between themselves which sounded like baby talk to others. Understandably some of the more serious people with whom they mixed found this off-putting.

So for all of Pearse’s glorification of blood sacrifice, these are not characteristics you would ordinarily expect of someone who lit the fuse that shook an empire and shaped a country.

They don’t fit the “real man” persona. The same may be said of some of the others who were shot in Kilmainham as instigators of the rebellion. Thomas MacDonagh was an intellectual, academic man who wrote poetry and taught French, English and Latin.

His close friend, Joseph Plunkett, later executed as well, was also a poet and shared with him very deep interest in the Irish language. Both were interested in theatre, and Plunkett was a founder of the Irish Esperanto League (James Connolly was also an advocate of the universal, artificial language Esperanto).

Again, “must write poetry” is not a requirement you would ordinarily include if you were advertising for a team to lead a rebellion. Pearse, of course, would have met that particular requirement also – and if “short story writer” had been added to the qualifications he would have ticked that box as well – and anybody who suffered through Íosagán in their school days may wish he had concentrated on blood sacrifice and left the writing alone.

Rebellion and war, of course, also demand tough men who can do things that perhaps Pearse, MacDonagh and Plunkett would have shied away from. We had plenty of them too, most particularly in the War of Independence, not only under the direction of Michael Collins but in various units of the IRA.

Maybe I should declare here that I see the 1916 adventure as wrong. Like their counterparts in the modern IRA, I think that they and their successors achieved nothing that could not have been achieved without great bloodshed.

But that doesn’t mean that I don’t see the outcome of the rebellion as rather astonishing. Like, I suspect, many other people who are unsure about whether they should have done what they did, I have a certain affection for this group of men who went to their death to bring about a future that they would never see.

The whole concept of “real men,” it seems to me, is a concoction of those who seek to create an image of manhood that makes men willing to become cannon fodder for those who would who manipulate them.

Gradually, I think, we are throwing off that image, that mask, that deception. The 1916 story shows us that men – indeed men and women – who can make astonishing things happen can also vary astonishingly in their own personal characteristics. To put it another way, the “real man” is a concept so complex that in the end it doesn’t really mean anything. The “real man” is dead.That’s one legacy of 1916 I will gladly buy into.

9 Michael Harding: ‘Thank you for your love,’ I wrote to a friend. Then I tore it up