Going for a walk today? These are the rules you need to follow 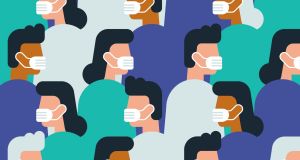 If you’re wearing a mask and see someone you know, resist the temptation to pull it down to say hello. Illustration: Getty Images

The coronavirus pandemic has made previously benign activities – hugging a friend, having a bout of hayfever, popping into the supermarket for a 32 pack of toilet paper – fraught with the potential for outraging public decency.

The redrawing of the boundaries around what is considered socially acceptable behaviour has happened at unprecedented speed. It seems like only weeks ago I was standing in my kitchen with a measuring tape and a husband, trying to figure out what two metres looked like. (It actually was only six weeks ago, but that was in old time. In new time, it’s roughly 154 pandemic years.)

Few activities have demanded such profound psychological transformation from so many in such a short space of time as the act of going for a walk.

Fifty eight years after we got our first motorway, we still haven’t learned to use the things. Yet, almost overnight, we have adapted to an entire, unwritten code of behaviour which instructs us on how to comport ourselves when we’re out for a walk in the age of the virus.

It’s time that code was written down – for ourselves, but also for future generations, who might be curious what old folk mean when they refer to a “handshake”, or wonder why footpaths constructed before 2020 were often less than six metres wide.

We stopped making eye contact with each other when the pandemic kicked off. This isn’t due to a WhatsApp rumour that someone’s brother who is a guard heard from his boss’s sister’s wife’s second cousin who works in the hospital and got it from a senior consultant that Covid-19 could be transmitted through the eyeballs.

There may be more primal forces at work, suggests psychologist Ian Robertson, when I ask him to speculate. He points out that we think our behaviours are conscious or “shaped by our personalities and wishes, but in reality we’re incredibly attuned to environmental contingencies”.

When we give each other a wide berth on the street while out walking, “it’s almost as if it’s a functional behaviour, in case someone coughs two metres away”.

But in doing so, we send the message to our brains that the other person represents a threat. Our instinctive reaction to threats is to shy away.

“We’ve all become potential threats to the households that we pass on the street,” Robertson says. This may explain the illogical stab of rejection some of us experience when a passerby gives us an overly wide berth – we feel rejected because, well, it is a rejection. Sorry.

“If that goes on for a year, or a year and a half, and embeds itself as a set of habits, it will take a long time for them to change back,” suggests Robertson. So overcome those primitive urges. Look up. If you feel like it, chance a smile. I’m no Tony Holohan, but I’m pretty sure you can’t catch Covid-19 from smiling.

2. Don’t be a selfish herd – switch to single file

The selfish herd theory suggests that if you’re out for a walk and meet a solo walker, your instinct might be to stay huddled together against the oncoming threat. This is rude, unnecessary and selfish. If you’re in a group and encounter a solo walker, you must switch to single file, even if you’re out with children. Make use of the grass verge, people’s driveways and the road if it’s safe. Also, the group should be the ones to break the ice and smile first.

3. Joggers give way to walkers

The comedian and podcaster Jarlath Regan got a lot of very intense reaction after he innocently asked Twitter who should give way on a footpath: a family of three or a jogger. The answer, as above, is that the family of three should rearrange themselves into single file but the jogger, as the faster moving vehicle, should be the one to move out onto the road if necessary, and only so long as it’s safe.

4. Don’t make people with small children get onto the road

You’re out for your evening walk, and you see a couple or adult with a small child approaching. There’s no dilemma here: you will be the one to step onto the road, and you will not tut, glare or glower at the child, even if they don’t get into single file smartly enough for your liking. You are a civilised human being and the child is a smaller and more vulnerable human being, not a vector.

In fact the latest evidence on asymptomatic transmission, allied with the fact that children haven’t been in school or on playdates, suggests that you’re more likely to the be the threat here. So smile, you seething vector.

5. Allow two metres – but don’t jump into the path of an oncoming car

If the footpath is too narrow to pass safely and it doesn’t seem safe to walk onto the road either, don’t do it. An oncoming vehicle is much more likely to cause you serious harm than an oncoming human, no matter how pale and snivelly they may appear.

If you and the doggo, no matter how adorable, friendly and wouldn’t-harm-a-fly it is, are taking up the entire breadth of the footpath with its extra-long leash, rein it in.

If you arrive at “your” walking or running spot and it’s crowded, even if it’s within your permitted exercise zone, go home. Yes, you live down the road, come here every day, pay your property tax, know the man in the coffee van by name and have every right to exercise here, but that doesn’t mean you’re obliged to do so at any cost. And no, it’s not considered good manners to go around demanding strangers’ Eircodes in beauty spots.

8. You can say hello through a mask

Let’s face it, wearing a mask in public when you’re not a medical worker is at first going to feel like the height of notions – dramatic, foolish, attention-seeking. But that’s just a symptom of you being Irish. If you’re wearing one outside, and you see someone you know, resist the temptation to pull it down in order to say hello.

And obviously, you won’t be shaking hands – no less a demi-god than Dr Anthony Fauci himself has said “I don’t think we should ever shake hands ever again, to be honest with you.”

Try a sweatshirt curtsy instead, do the Wuhan foot shove, or start wearing a hat so you can tip it. Or better still, go for the traditional Irish male greeting of shoving your hands deep into your pockets and giving a curt nod and grunt.