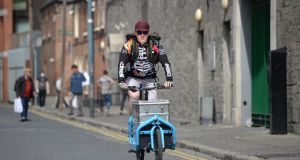 Oscar Little (21) lost his job as a courier last month, but as a volunteer he is now on his bike six days a week making deliveries for the Capuchin Day Centre to families who are in need.

On a typical Saturday afternoon, he packed his cargo bike full of food parcels and takeaway dinners to deliver to several hostels for the homeless in Dublin city centre before heading to Tallaght to deliver more meals to families isolating in their homes.

Despite losing his job, the music student with the British and Irish Modern Music Institute has refused any payment from the centre.

“They asked me to invoice them but I don’t want to. The centre is a charity. If I take their money, am I taking food out of someone’s mouth? They don’t have unlimited money and they’re doing twice the amount of work they normally do. There’s a lot more pressure on the centre now,” he said.

At the start of the outbreak, the charity was handing out about 650 dinner packages a day, but in recent weeks that number has grown to 870, with many people who had never used the service before now getting in touch, according to manager Alan Bailey.

“We have a lot of new people who’ve lost their jobs and don’t know what to do or where to go. These are people who were totally self-sufficient and, all of a sudden, the rope has been pulled from under them,” Mr Bailey said.

“It’s a huge pressure on the centre because we’ve split the staff in two to work opposite days. Half work the first three days and the other half work the latter half of the week, because we’re afraid of staff getting sick with the virus.”

Describing Mr Little as “a vital part of our service”, Mr Bailey added: “He’s a quiet, unassuming chap and very good to the people he’s dealing with. People have told me they’d have no money for cigarettes and he’s buying cigarettes for them. Gestures like that mean so much to people.”

He recalled delivering Easter eggs to a Roma family in Tallaght last month. “The kids got really excited. . . over something as small as an Easter egg. One of the parents let the kids out front to get them from me and they ran back into the house jumping around, really happy.”

The deliveries are “really helping” and making things “much easier” for families who are isolating in their rooms, according to the receptionist at Maple Hotel on Gardiner Street, who takes the meals from Mr Little and leaves them outside the bedrooms of residents who are sick and unable to leave to cook or shop.

Mr Little’s mother, Angy, is a doctor at the Capuchin Day Centre – “she kind of roped me into doing this” – while his father, George, works in a hospital A&E department.

“If I can help out in any way when this is over, I will stay involved with the centre,” the student added.

“When I finish my music degree, I want to do medicine at some point. I like helping people and being able to do things for people that they can’t do for themselves. Maybe it runs in the family.”