Give me a crash course in . . . Non-Fungible Tokens 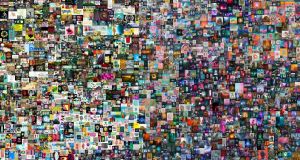 The auction for the NFT asserting ownership of Mike Winkelmann’s Everydays - The First 5,000 Days fetched $69.3 million.

Non-fungible Tokens? Does this have something to do with that missing dolphin in Kerry?

You’re thinking of “No Fungie Today”. Same initials, different meaning. Non-fungible Tokens are the hottest internet trend for people with all the money in the world and nothing left to spend it on. In particular, it’s the big fad in visual arts. And it’s spreading to music. The major news this week is singer Lewis Capaldi announcing plans for an “NFT-ticketed event”.

The maths is tricky. But the basics are straightforward. An NFT is essentially a digital certificate of authenticity. It’s a record of who owns a particular digital asset. And it is verified with the same blockchain technology used in cryptocurrencies. The fear is it is causing a speculative frenzy in the art world.

I liked it better when we were talking about adorable marine mammals.

Think of an NFT as a certificate which proves ownership of a particular asset – a work of art, say. Bear in mind you are not necessarily buying the exclusive rights to something. In March, Christies auctioned a computer-generated collage by artist Mike Winkelmann, also known as Beeple. The illustration came as a JPG file and was titled “Everydays – The First 5,000 Days”. You can access the image right now via a search engine for free. And yet the auction for the NFT asserting ownership of the work fetched $69.3 million.

Who would pay nearly $70 million for a certificate of ownership . . . of a JPG?

The purchaser was crypto investor Vignesh Sundaresan, also going by the super villain-style appellation of MetaKovan. “This NFT is a significant piece of art history,” Sundaresan said. “Sometimes these things take some time for everyone to recognise and realise. I’m OK with that.”

Not everyone agrees and there are concerns the Beeple sale may be part of a bubble. “We’re in a frenzy of speculation. I don’t know how long these prices will be sustainable,” Robert Norton, co-founder of Verisart, which certifies artwork on blockchain, told the New York Times. “We’re living in a moment of collective hysteria.” The New Republic’s Jacob Silverman put it more bluntly: “[NFTs] are title deeds for increasingly useless c**p.”

Last February, a NFT of a LeBron James basketball dunk sold for $208,000. Weeks later, Jack Dorsey, one of the founders of Twitter, sold a “copy” of his first tweet, with NFT cert, for the equivalent of $2.9 million.

What do you mean “equivalent”?

The tweet – or the digital certificate of the tweet – was purchased using Ethereum, one of the cryptocurrencies closely associated with NFTs. Some observers see NFTs as an extension of the Cryptocurrency trend, as they are assets that can be easily purchased with virtual currencies such as Ethereum or Bitcoin.

So what has any of that to do with music and Lewis Capaldi’s announcement this week?

The music industry is always looking for additional revenue streams. And it reckons it has a potential new source of income in NFTs. In March, the Kings of Leon released their latest record as an NFT. Fans buying the NFT received perks such as exclusive artwork and front row seats for concerts. They also had to listen to the album, but such is life. Capaldi, meanwhile, has announced an NFT “collectible card experience” and an exclusive NFT-ticketed show.

Whatever about NFTs, surely the pasty-faced singer-songwriter bubble is going to burst.

That remains to be seen. But yes, the worry is NFT prices are unsustainable and could collapse. There has certainly been a rush to cash in. Artist Damien Hirst, for instance, has announced a collection of 10,000 NFTs called “The Currency Project”.

Okay, some rich people want to waste their money on digital certificates. Why should the rest of us care?

NFTs come at a high environmental price. Digital certificates are generated and maintained via complicated algorithms, requiring a large number of computer servers. And so they consume lots of electricity. London-based digital artist and computer scientist Memo Akten has calculated the mining and sale of the average NFT produces 211 kilos of carbon dioxide.

He went on to estimate Hirst’s project would consume the equivalent of the energy required to maintain the average American house for 412 years. Only a few may understand what NFTs are all about. But we could all end up paying the environmental cost.