‘I cannot believe this country fell for ‘Get Brexit Done’ 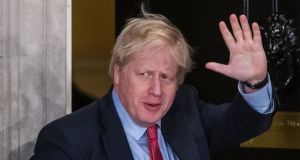 Following the UK general election result of a Conservative majority the Brexit date of January 31st is fairly certain.

We asked Irish people living in Britain to give their views on the outcome.

I’m a local authority social worker in the north east of England. I work with vulnerable children and their families, and every day I see how relentless cuts and austerity impact on these people and the services and support we can offer them. As a student, I completed a placement at a drug and alcohol rehabilitation service in Blyth, one of the most deprived and forgotten-about towns in the region. The people I worked with there were living hand to mouth and struggling to get by thanks to a government that doesn’t care about the poor and the marginalised. Blyth Valley was the first to announce a Tory candidate last night. I’m devastated for them all.

I have lived in Scotland for 5 years now. I have been through the university system here completing my degree and masters of science. Scotland offers free third level education to EU nationals. I have always worked full time and have found it very easy to get work. SNP are the only party who care about the welfare of the people of Scotland. Scotland didn’t vote for Brexit, Scotland didn’t vote for conservatives yet we have to go along with what Westminster decide.

In Scotland there is a vibrant European community that is cherished. England do not want to be part of Europe but that doesn’t mean you have to drag Scotland out to. If anything this will anger the people of Scotland and hopefully will encourage the rise and passing through of Indyref2. Nicola Sturgeon is the only female politician in Britain that is a role model. She knows what she wants and is fighting hard for Scotland.

Moved to Newcastle from Ireland two years ago for a Web Developer job in the city and only started following UK politics now. The whole situation is madness, they’ve shot themselves in the foot once again. I’m not sure there’s much choice now other than moving home or moving to Scotland with the hopes they vote Independence and stay within the EU. As an Irish person I don’t think I can live in a country where such a majority votes for such a right wing lying government, and a lot of that majority probably doesn’t want me living here.

Totally gutted to be living in a place where the lunatics have really taken over the asylum . I fear for the future of our children, our planet and country, in a country that is becoming more right wing by the day.

Just relieved that the EU situation is sorted. I am dreading the trade negotiations ahead, but at least it will be easier. I hope that other areas are looked at and promises honoured such as NHS, policing. Reading the comments from your readership I feel there will be a bigger divide as most are very bitter against the UK and kept dredging up the past; It may become too expensive for us over here to visit Ireland as the prices over there are so high and you could get a 5 star holiday abroad for so much less. I have been to the shops and most people are happy their voice may now be heard. It will be tough to begin with but the UK will survive, I was born and reared in Ireland and came here aged 18 to train as a nurse and this country has given me a good standard of living.

I was absolutely broken waking up to the news this morning. I cannot believe this country fell for the slogan “Get Brexit Done” after four years of hard evidence proving the opposite. It is disconcerting when you realise the majority of the country vote for a racist man and want you out of the country. I am not looking forward to another decade of frustrating Brexit negotiations, increasing racism, deepening divisions and ongoing failures to hit environmental targets. This country doesn’t seem to be learning from history at all, not even recent history.

I moved here 5 years ago. I’m a PhD candidate at the University of Oxford. All my family are spread out between Tipperary and Waterford. The 2019 General Election results were devastating. Brexit has done irreparable damage to this country. People voted for Johnson knowing he’s openly lying to them. That’s before we even touch off the blatant racism, homophobia, misogyny and ableism Johnson prides himself on. Either people think the same way, or care more about Brexit than basic human decency. England has bought itself another half decade of increasing poverty, and a Brexit-fuelled brain drain that starts with the best and brightest. I wanted to settle here, along with many of my friends. Now we’re looking for an exit strategy.

I have lived in Scotland for 10 years now and benefitted from a free university education and a thriving TV industry where I now work. I definitely feel like I am safe here because of the SNP majority, and between that, and the nationalist majority in NI, it looks like Boris might just be tearing the UK apart, Scotland will become independent, NI will rejoin the Island of Ireland, and England can sink into the pit of misery they have created for itself. I was able to buy my own flat and work in the industry I studied for here. Those options are not as widely available at home so I will be sticking it out, no matter how hostile things get. Pretty depressed though!

Twitter has once again manipulated my expectations: I thought the Conservatives would win, but not with that majority. Brexit seems to have counted for more to people than anything else, and it seems a bit tragic to me. Hopefully the majority will allow for a softer exit from the EU, and perhaps the fears of greater American influence will be allayed, but I won’t hold my breath. Thankfully I can look forward to a move back to a flawless country with the prospect of ample city-centre whitewater rafting facilities in the near future.

I’ve had a feeling of impending doom for a few weeks, and now we’ve elected a pathological liar and a charlatan as PM. It’s terrible for all of us in the NHS and the other public services, Anyone on benefits will be terrified for the future, and I can’t stress how worried I am for what awaits my grandchildren further down the line. God help us!