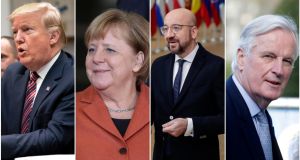 US president Donald Trump has congratulated Boris Johnson on his victory in the UK general election saying Mr Johnson’s win meant the two countries would be free to strike a “massive” new trade deal after Brexit.

“This deal has the potential to be far bigger and more lucrative than any deal that could be made with the EU. Celebrate Boris,” Mr Trump tweeted.

In Brussels EU leaders gave mixed reactions to the UK Tory victory as they arrived for the summit, a combination of relief at the Brexit certainty provided by the result and concern that the next phase of talks would be difficult.

“It is obviously a giant success for Boris Johnson. He is a charismatic leader,” Mr Babiš said. “He won and now they will leave, unfortunately. That is bad news for Europe.”

“I hope that Boris Johnson ‘delivers’ as he said himself during his campaign,” said Luxembourg’s prime minister, Xavier Bettel,.

“People need to have clarity, and I hope that with yesterday’s results, they do,” he continued. “The excuse that there is no clear majority in London doesn’t last anymore.”

However, he cautioned, “it’s not going to be simple, but it was never simple” to put the withdrawal agreement in motion.

Brexit will be able to go forward, Dutch prime minister Mark Rutte told reporters. Negotiating a free trade agreement by the end of 2020, however, will be “quite a challenge given the short time available,” he said.

Before trade talks can even take off, EU countries will need to agree on a negotiation mandate first, he cautioned. “We have to discuss the precise approach to these negotiations,” he said, while refusing to comment on whether the Netherlands would back a German proposal for a less ambitious “step 1” trade agreement that could be upgraded at a later stage.

European Council President Charles Michel said the EU was ready to negotiate a free-trade agreement with Britain but called on London to work in good faith. He said the EU hoped for a quick British parliamentary vote on withdrawal from the block.

“We expect, as soon as possible, a vote by the British parliament ... It’s important to have clarity,” he said.

Britain’s opposition Labour party has been accused of allowing prejudice against Jews to exist within its ranks.

In Catalan, the separatist leader Quim Torra congratulated the nationalists on their victory in Scotland after Scottish National Party leader Nicola Sturgeon said her country must be allowed to hold another referendum on its place inside the United Kingdom.

“Congratulations to the friends of @theSNP and First Minister @NicolaSturgeon for this magnificent results that demonstrate the democratic will for independence and the European commitment of the Scottish people,” he tweeted. –Additional reporting from Reuters