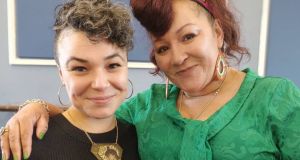 Jess Kavanagh with Lorraine Maher of I Am Irish

I’m not a fan of weddings, but I made sure not to miss my cousin Jamie’s big day. Jamie and I always got along; racially ambiguous like myself, he looks more indigenous Latin American via Dublin 3 but is actually southeast Asian-Italian. After the wedding another cousin, annoyed at her lack of an invitation to the dinner, is spitting some low-grade venom as I roll a cigarette. I tune in at the worst moment.

“I don’t know why anyone ever told you your grandfather was a doctor. He was a sailor – and everyone knew that.”

I’m taken aback. I don’t react. If you’ve experienced racism you know this moment: a surreal outburst, wildly out of context. It happens so quickly you tend to be left feeling only confusion and mild amusement. The rage creeps in hours, maybe days later.

I have been thinking more about my biological grandparents’ relationship. Why was it always called an affair? Why wasn’t it ever a romance? Even now, inter-racial relationships suffer prejudice

My biological grandfather was a Nigerian medical student and my biological grandmother was a nurse when they met. The story of their affair changes. Until I was in my 20s I was told he was a student at the Royal College of Surgeons in Ireland when they met, but that has shifted at times to them meeting in the UK. My mother was adopted as a newborn from a religious-run institution in Blackrock, Co Dublin, and my aunts and uncles – Nigerian-Irish, Indian-Irish, Filipino-Italian and North African-Irish – were also adopted as babies.

Many mysteries remain unsolved, including my grandfather’s full name, so I can’t be certain of my ancestral tribe. Recently, I have been thinking more about their relationship. Why was it always called an affair? Why wasn’t it ever a romance? Even now, inter-racial relationships suffer prejudice. I wonder what it must have been like for my grandparents, in the 1950s and 1960s, when Ireland struggled with the idea of Catholics and Protestants getting married, let alone a person from a different nationality, race and religion.

Marriage was nigh-on impossible: families, the church and society rejected inter-racial unions. So, in a country without legal contraception, what became of their mixed progeny?

Ireland has had generations of its own people of colour, decades of mixed-race children born outside the protection of wedlock. Significant numbers were sent to industrial schools across the country. If they survived, many immediately emigrated. Growing up, the women who looked like my mother all had similar stories of adoption, survival or relocation.

Current rhetoric suggests Irish multiculturalism is a novel concept; that this is the first generation of people of colour to live here, mostly unmolested by active, violent, systemic racism. But this erases the existence and experiences of generations of mixed-race Irish people.

In February 2020, details emerged of an unpublished report by the Collaborative Forum on Mother and Baby Homes – established by the Government in 2018. It showed that mixed-race children were routinely withheld from adoption, and “were eugenically rated for likely intelligence based in part on the nuns’ assessment of the intelligence of the natural mother and how ‘negroid’ the features of the infant were”.

The children’s identities were erased; the report noted that “when it came to the child’s records, the religious orders did not record the ethnicity of a child’s parents and that the default description – African – was mainly used”.

I have been blessed with a community in Dublin where I feel heard in my experiences and complex heritage, a community I know my mother hoped for throughout her life

Rosemary Adaser, chief executive of the Association of Mixed Race Ireland, or Amri, which aims to raise awareness about Irish people of mixed-race backgrounds, was a member of the collaborative forum. “I remember listening to [then taoiseach] Enda Kenny apologise to the survivors of [religious] institutions back in 2017. I listened and felt that his apology was not for me.”

Amri recently attended the UN Commission on Racial Discrimination in Geneva to discuss the Commission of Investigation into Mother and Baby Homes. The association has highlighted the lack of acknowledgment given to the trauma of mixed-race survivors at the intersection of illegitimacy and racial discrimination.

Caelainn Hogan, author of Republic of Shame, explains that the intricacies of the institutions perpetuated invisibility: women were moved from Magdalene laundries to mother and baby homes, industrial schools and back to laundries. In her research, Hogan uncovered newspaper clippings with adverts for children of mixed origin from 1965 to 1979. The ads described children with “coffee-coloured skin” and “dark appealing eyes” waiting for good Catholic families to adopt them. It was devastating to read.

But this was when the adoptions happened at all. Adaser also points to the practice of mixed-race children’s orphanage admission records having “coloured” filed under defects that may inhibit adoption. Meanwhile, due to the stigma of illegitimacy, there was rarely a father’s surname on the birth cert, which meant a complete inability to trace non-Irish ancestral heritage. This has left survivors in an identity paradox of being othered within their Irish community but also unable to pursue their “othered” heritage.

Furthermore, the erasure of key details on these records caused a complete inability to quantify the amount of mixed-race children who were trapped in the cycle of institutions.

The Irish Black Lives Matter movement has been incredible to witness. My mam, who died of cancer in 2006, never saw a politically passionate, young black Ireland, and I know she would have been front and centre: her activism dates back to the anti-apartheid movement in the 1980s.

Lorraine Maher, who is of Irish and Nigerian ancestry, established I Am Irish, a creative movement and educational platform that promotes diversity in Irish ancestry. She relocated to London in her teens. She queries the place for people of mixed heritage in the current landscape of racial discussion in Ireland.

Movements have been made on a national level to address diversity such as The Anti Racism Committee chaired by Prof Caroline Fennell. The Traveller rights activist Sindy Joyce and young, important voices like Nana Nubi are present in the committee. Though to date there is no mixed-race representative on the committee.

“The needs of mixed-race Irish [people] are different from the needs of families who have come from Nigeria, for example, who are still engaging in their culture,” says Maher. “They are still capable of having an African experience, and we are not.”

I have been blessed with a community in Dublin where I feel heard in my experiences and complex heritage, a community I know my mother hoped for throughout her life.

In our new move towards multiculturalism, we must acknowledge the community of people of colour who were born and have lived here for decades. To this end, Lorraine Maher is launching the first International Mixed Race Irish day in May 2021.

“We have come together to ensure black and brown voices are heard. I am so looking forward to being embraced in a different way in Irish society... People who have not previously engaged in the conversation now want to engage, learn and contribute. That makes me really hopeful.”