When life gives you lemons… delicious aphorisms and their interesting origins

“After a good dinner one can forgive anybody, even one’s own relatives” 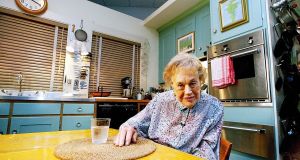 My fridge is adorned with a collection of magnets, holding up an assortment of treasured bits and pieces; photo-booth strips, a letter from my sister and some treasured childhood photographs.

The magnets are mostly reminders of past holidays in places such as Marrakech and Berlin. One of my favourites, however, is a magnet that holds an aphorism by none other than Miss Piggy: “Never eat more than you can lift.” It’s sage advice that I contemplate each time I reach into the fridge for more cheese.

Google the phrase “quotes for kitchen walls” and you’ll be presented with images of unattributed saccharine phrases such as “Happiness is Homemade” or “This Kitchen is Seasoned with Love”. Ugh. So, let’s just say you were thinking of commissioning one of our great Irish illustrators, such as Fatti Burke, Fuchsia MacAree or Steve McCarthy, to make some art for your kitchen. Wouldn’t you want them to be inspired by a meatier quote?

You could take inspiration from an Irish writer. Brendan Behan once said: “The most important things to do in the world are to get something to eat, something to drink and somebody to love you.” It’s beautiful – but a reminder of Behan’s alcoholism that brought him diabetes and an early death at age 41 is probably not what you want to ponder as you eat your breakfast eggs.

“After a good dinner one can forgive anybody, even one’s own relatives” is one of the truest things Oscar Wilde ever said, but it might be a bit awkward to have it hanging over your lemon-faced Aunt Linda when she comes to visit. Perhaps the more diplomatic Wilde quote of “I have the simplest tastes. I am always satisfied with the best” may be less likely to offend.

“There is no sincerer love than the love of food”, from George Bernard Shaw’s 1903 play Man and Superman, is even less problematic. Conjuring up a little more adventure and joie de vivre is Jonathan Swift’s quote “He was a bold man that first ate an oyster.”

The chirpy message of “When life gives you lemons, make lemonade” is a saying that lacks a definitive origin story. American writer and philosopher Elbert Hubbard wrote an obituary for his friend Marshall Pinckney Wilder, a famed dwarf actor who died in 1915. Hubbard wrote that Wilder had “picked up the lemons that Fate had sent him and started a lemonade- stand.”

The phrase appeared in a form closer to the familiar version we know today in the 1948 self-help book How To Stop Worrying and Start Living, though its author Dale Carnegie attributed the quote to the American businessman Julius Rosenwald. The message of positivity in this lemony quote has perhaps lost its zest as we have moved into the 21st century, where the trend in the West is to approach problems with self-awareness and compassion, as opposed to stifling our emotions with well-meaning positivity. I mean, what if you haven’t learned how to make lemonade yet? Won’t this quote just make you feel worse about your problems and your inability to face them?

Julia Child had a deliciously pragmatic approach to food and eating, in the style of a strict but fair school principal. I always read her quote “If you’re afraid of butter, use cream” as a Child chide to those who pay an unhealthy amount of attention to the calorific quantities of their meals. I disagree with Child when she says “People who love to eat are always the best people.” I have friends who think Pot Noodles are delicious, but we bond over other pursuits such as music, books and silliness. I do love Child’s take on dieting, though. “The only time you should eat diet food,” she says, “is when you’re waiting for your steak to cook”. Hear, hear.

Of all the food quotes out there, I think the one I’d like to read every day is from American author and humourist Erma Bombeck, who once said “I am not a glutton – I am an explorer of food.”

I’d happily hang a print of that in my kitchen. Heck, I’d have it printed on my business card.