What is the fairest way to leave a tip at a restaurant?

Tip in cash when possible, and grill managers about card tips and service charges

Dublin’s high-profile Ivy Restaurant has been criticised for holding on to card tips; year-long protests outside the restaurant continued this week. Video: Kathleen Harris 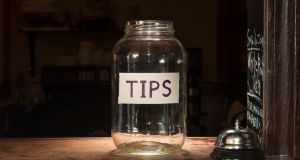 Card tips go through the till, so staff may have no say in what happens to them. Photograph: Jess Milton/Getty

It’s the busiest time of year for the hospitality industry, when its workers have a chance of making decent tips. But diners may be unaware of controversies over the past year about the fact that tips and service charges are often not passed on to staff.

Many restaurants, cafes and hotels distribute gratuities fairly, or allow staff to divide them up. But the set-up in any given establishment seems entirely dependent on management’s decency. In reporting on this issue for more than a year, The Irish Times has heard stories of management keeping tips left by credit or debit card, of tips being used to pay for breakages or walkouts, of service charges being retained by restaurants.

Often there’s no clarity about how much is left in tips or how they are split; sometimes staff get a sum for “tips”, without any breakdown.

One waiter describes how a night’s tips – €2,000 in cash – apparently disappeared just before Christmas last year

Tips are, quite equitably, often shared among kitchen and other staff. But managers and owners are sometimes included too. Decide for yourself whether this is fair. However, we know of places where the owner or manager skims money off the tips before they are divided. In another, a waiter describes how one night’s tips – €2,000 in cash – apparently disappeared just before Christmas in 2018.

Card tips go through the till, so staff may have no say in what happens to them. Dublin’s high-profile Ivy Restaurant has been criticised for holding on to card tips; year-long protests outside the restaurant continued this week. So, for waiting staff, cash is king. Some restaurants pass on credit-card tips, but there are enough that don’t to make it an unreliable way to reward staff. Try not to eat out without having cash to tip, even if you’ll pay for the meal by card. If stuck, a smaller cash tip is sometimes better for staff than a larger card tip.

Ask your waiter straight up, but discreetly, how tips – cash or card – are distributed, and go with your gut to determine whether they feel free to tell the truth. Some managers have instructed waiters to lie or dodge this question. Asking a waiter quietly if staff get tips will occasionally elicit a fleeting “no” or “some of them”. If your waiter says tips go to staff, ask if it’s on top of basic pay or as part of it. You may want to ask if managers are included in tips.

Don’t be consoled by signs

Beware of notices that say “All tips and gratuities are distributed to staff”. The Restaurants Association of Ireland sent members such a sign to display following negative publicity about tip retention. The signs may console customers, but anyone can put them up without monitoring, and because they don’t say if tips are distributed on top of contracted wages or as part of those wages, they are meaningless.

Service charges are another thing entirely. Often considered a sort of tip, a service charge would be better described as an inflation of menu prices. If a service charge is added to a bill – often for larger tables, and sometimes for all tables – most people assume it’s a mandatory tip. It is not. Restaurants can, and some do, use service charges to pay wages or to pay the electricity or vegetable bill.

At a Joint Committee on Employment Affairs and Social Protection discussion on October 10th, Irish Hotels Federation chief executive Tim Fenn and the Restaurant Association of Ireland’s Adrian Cummins made it crystal clear that service charges belong to hotels and restaurants. Fenn said that while tips and gratuities should go to staff and policies should be displayed, “service charges levied by a business, as distinct from tips and gratuities, are part of business revenues and, as such, can be applied to meet all business costs”.

If the bill describes the service charge as optional, or discretionary, you can request that the restaurant remove it – and leave a cash tip instead

When challenged on why it’s called a service charge if it doesn’t go to staff, despite customers’ understanding that it’s a tip, the spokespeople offered the committee no credible answer. John Brady TD did not mince words: “Essentially, it is a hidden charge or a top-up. Why is it not included in the menu price in the first place?”

So what’s a diner to do?

You could avoid eating anywhere with a mandatory service charge, although this may limit your choice of venues if you are eating out with a crowd. Before you book, remind yourself that on menus with mandatory service charges, you are being charged 12.5 per cent more than the displayed prices. That €20 dish on the menu is really €22.50. The service charge, which essentially amounts to hidden higher prices, also means staff are unlikely to get many tips.

If the bill describes the service charge as “optional, or discretionary” (for example at the Ivy, and many high-end restaurants) you can, and probably should, request they remove it – and leave a cash tip instead.

It’s not illegal for restaurants to withhold tips. Many acknowledge it’s wrong, but there’s disagreement about how to regulate.

Two Bills are before the Oireachtas. Senator Paul Gavan’s Private Members’ National Minimum Wage (Protection of Employee Tips) 2017 Bill, designed to ensure staff have a legal right to retain tips and service charges, has passed the Dáil and Seanad with cross-party support. But Fine Gael and Minister for Social Protection Regina Doherty have opposed it.

Additionally, Doherty has introduced an amendment to the payment of wages Act so that tips cannot make up contractual pay – but without giving workers a right to tips. And, problematically, her Bill specifically excludes service charges. It is expected at Cabinet before Christmas. Meanwhile, when it comes to tipping, cash is still king.

The Debenhams picketers: ‘We are like a little family’
10

Ross O’Carroll-Kelly: ‘They want us to vacate this place so they can use it as a love shack?’
Real news has value SUBSCRIBE