Daily Dish: How to transform noodles into an indulgent dinner for one 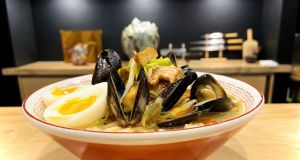 When I was a student, this was my favourite snack. I used to make it for myself before Kendo club. In those days, I just followed the instructions on the packet though. Place the noodles in water, boil, and then add the flavoured powder in the sachet.

I think this is a universally loved student dish, be it Pot Noodle or Koka noodles. But in Japan I had Nissin Noodles, Japan’s favourite noodles. Over the years, I have tweaked the recipe and finessed the presentation.

It is still my go-to comfort food and it’s a quick and tasty meal for when I’m busy. When I eat this, I am transported back to my student days in Japan and I still love this dish to this day.

How to make it:

1. To make soft boiled egg, drop egg gently into boiling water and boil for six to seven minutes. Put the boiled egg under cold running water until the egg gets cold. Peel the shell off carefully.

3. Place a dash of vegetable oil into a frying pan and heat well. Stir fry the bacon or ham, carrot, onion and cabbage. Season with salt and white pepper.

4. Add 800ml of water and the mussels to the frying pan and bring to the boil with the ham and vegetables.

5. Add the flavoured powder in the sachet and the noodles. Boil for two minutes.

7. Place the noodles into a bowl, pour over the liquid and place the vegetables, ham and mussels on top. Then cut your boiled egg in half vertically and place on top.

8. Drizzle a dash of sesame oil over the top.