Vegan mince pies that will put everyone in the festive spirit 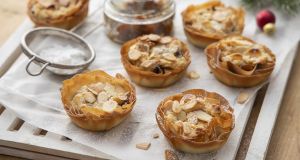 When life gets busy, I love to have a packet of ready-made filo pastry stashed away in the fridge or freezer. It has saved me countless times when unexpected guests have needed to be fed in a hurry from a nearly empty fridge.

I did start out in the traditional way, slathering each layer of filo pastry with melted butter. When time was really short, I discovered that, if you work quickly, you can omit the butter altogether. As long as the pastry doesn’t dry out before the tarts go in the oven, the tart shells will hold together without the fat. The unexpected bonus is getting all the crunch you want from the filo pastry but without a greasy finish.

As well as a great crunchy tart shell, the lack of butter also makes these pie cups suitable for vegans. Filled with home-made vegan mincemeat and topped with a crumbly egg- and dairy-free frangipane, these mince pies are a real treat.

Whipping up chickpea water (known as aquafaba) to a foamy texture is commonly used in recipes for vegan meringues. Aquafaba provides an alternative to whisked egg whites, creating a crisp frangipane crust to these mince pies.

If you’re feeding a crowd, the filo pastry case could also be useful to stop vegan and non-vegan pies getting muddled.

For those who don’t like mincemeat, the filo shells can be filled with the frangipane mixture and topped with fresh fruit before being baked. Pears, plums, apricots or cherries will combine beautifully with the almonds in the frangipane.

Any leftover mincemeat is lovely served slightly warmed, with a scoop of (vegan if you prefer) vanilla ice-cream melting over the top.

Some brands of ready made pastry are actually vegan, which means you can also make these pies with shortcrust pastry. Shop-bought mincemeat can be quite nice but is sometimes overly sweet. Nothing beats a rich, slightly sharp yet fruity home-made version. It’s sure to get you into the festive spirit. It also makes a nice gift if you feel like making a larger batch.

Zest and juice of one large orange

50g margarine (or other vegan spread)

1 Lightly grease a muffin (or cupcake) tray with sunflower oil.

2 Unwrap the filo pastry and use it immediately (otherwise prevent the filo from drying out, by keeping it under a clean damp tea towel). Place two to three sheets of filo on a clean work surface. Use the tip of a sharp knife to cut 10cm rounds with a circular cutter (or the rim of a teacup). Repeat with the remaining filo. Press four to five circles of filo into each lightly greased muffin tray hollow, fitting snugly into the edges. Bake in the preheated oven for approximately six minutes, until the pastry turns light golden and crisp. Set aside to cool in the tin.

3 For the mincemeat, weigh out all the ingredients and transfer to a medium heavy-based saucepan. Cook over a medium heat, stirring occasionally. Simmer gently for 30 minutes until the mixture has thickened. Continue stirring it as it cools down.

4 For the vegan frangipane: use a spoon to mix together the sugar and vegan margarine to a paste. Stir in the ground almonds and almond essence. In a separate mixing bowl, use an electric whisk to whisk the chickpea water for three to four minutes until it forms a thick foam with stiff peaks. Gently fold the chickpea foam through the almond paste.

6 Preheat an oven to 180 degrees, fan, or equivalent. Spoon frangipane on to the filling in each pie. Scatter each filled pie with three or four toasted flaked almonds.

7 Bake the filled pies in the preheated oven for approximately 20 minutes, or until the frangipane is golden in colour.

Variation
Make mini mincemeat cigars, by filling then rolling the filo layers into a jumbo-sized cigar.