Use old fish and microwave your cakes: Chefs’ most controversial cooking tips 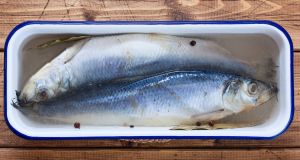 In June the chef Jim Fuller caused something of a foodie firestorm when he announced that we have all been cooking mushrooms the wrong way. Convention says raw mushrooms hate moisture; you are even meant to brush the dirt off rather than washing them before cooking.

Fuller, an American who now lives in Australia, said he always boils his mushrooms in a wok before frying them. After experiencing waves of indignation from people horrified by the prospect of being served a bowl of boiled mushrooms, Fuller took to Instagram to clarify, stating: “You can’t over-boil a mushroom.”

With this in mind, we asked other chefs for their most unconventional culinary tips.

Tom Hunt
Ecochef and author of Eating for People, Pleasure and Planet

“Boiled mushrooms are usually disgusting,” Hunt says on learning of Fuller’s technique. Then he softens his stance a little, adding: “An authentic Thai curry is normally quite watery, and that’s where you’d find something like that.” Finally, he comes clean; he boils porous veg, too.

“The other day we were going to have a barbecue, so we cut up some aubergines and peppers and bits and bobs. But then we got tired and decided not to, so I boiled them with half a can of coconut milk. Somehow even the boiled aubergine was delicious. It’s not something I’d normally do – boiled aubergine is a bit like boiled mushroom – but, actually, it became really silky. Some of it broke down and thickened the stew and it was really delicious.”

Robin Gill
Chef-patron of Darby’s, Sorella, and Rye by the Water, in the UK
The traditional view is that the sooner you eat a fish, the better it is. But Robin Gill suggests otherwise. “I clean the fish, taking out any offal and gills, then dip it in a salt brine for a time, based on the weight ratio,” he says. “I then hang the fish in our cold room, which has Himalayan salt in it, and dry-age the fish for between five and 14 days, calculated by how oily the fish is and its muscle composition. The result is incredible for cooking and eating.”

Although mug cakes are, in my experience, usually reserved for moments of traumatic personal bottoming out, Wager swears by microwaved sponges, albeit ones that are deceptively delicate and meticulously high end.

His recipe calls for 125g egg whites, 25g caster sugar, 30g natural yogurt, 35g ground almonds and 25g plain flour, hand-blended in a bowl and sieved into a siphon canister. “Then you fill small plastic cups halfway to the top before ‘cooking’ in the microwave on full power for approximately 60 seconds,” says Wager.

“Once they’ve risen, take them out of the microwave and allow them to cool fully before removing them from the plastic cups. You can also add powder or gel colourings to make vibrant coloured versions.”

Chefs such as Gordon Ramsay have long advised not adding salt to raw eggs when scrambling them, on the basis that it causes them to break down and turn watery. Joo disagrees. “I like to beat my eggs and salt them in the bowl raw and let them sit for 10 to 15 minutes, as it makes for a softer scrambled egg,” she says.

Add soy sauce to everything

Elisabeth Passédat
Head chef at the Cleveland Arms in London

“I’m using soy sauce in some very classical dishes, and some people would say it’s heresy,” says Elisabeth Passédat, who was a quarter-finalist on the 2018 edition of MasterChef: The Professionals.

“It goes in beef lasagne, creamy mustard sauce, dressing for salads. It has a subtle umami flavour and particularly stands out with cream, because of the fat. It makes me think of the long process of making it, the fermentation, which teaches me that patience is the key to greatness. When I am cooking I like to think about what happened to a particular product for it to reach its final state.”

Are people up in arms when they find out? “People haven’t complained, as far as I know. They seem to enjoy it!”

Use loads of oil

“There are many Turkish dishes that are braised in olive oil,” says Selin Kiazim, “especially different types of beans and vegetables. Most people only know to cook vegetables and keep them a little crunchy and bright green, but slow-cooking in olive oil is really delicious and almost brings out a natural sweetness in vegetables. You tend to add things such as garlic, herbs and tomatoes and then the dish is eaten at room temperature most of the time. You will find lots of variations at a good meze restaurant.”

Use a crisp packet to make an omelette

“Ferran Adrià did a Spanish omelette with crisps,” says James Ramsden, pointing me towards Adrià’s potato chip tortilla Española recipe (basically make an omelette, but put crisps in it). Ramsden goes one step further, telling me that you can actually make the omelette inside the crisp packet.

You get a bag of crisps, smash the crisps up, add things such as grated cheese and chorizo, pour in four beaten eggs, then boil the packet in a saucepan for 15 minutes. What comes out at the end looks like a kind of nightmarish flesh pillow. A YouTuber tried the recipe in April and declared it to be “not fantastic”. Has Ramsden attempted it? “I haven’t,” he admits. The coward. – Guardian