Bake a loaf of brown bread and it could win you a cash prize of at least €15,000 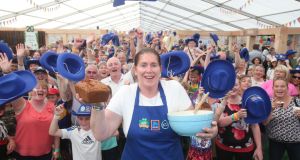 Forget sourdough. Bake a loaf of traditional brown bread instead and it could win you a cash prize of at least €15,000.

The annual National Brown Bread Baking Competition, in association with the National Ploughing Association (NPA) and the Irish Countrywomen’s Association (ICA) is just about to enter its preliminary judging stage.

The baking competition, sponsored by Aldi, usually ends in a final judging session at the Ploughing Championships. But with the event not taking place, it has a slightly different format this year. Entrants are invited to drop their freshly baked loaves off at the Aldi stores listed below, on the listed dates and times.

The winner’s loaf will go on sale in all Aldi stores in Ireland for 12 months, and they will receive sales-related prizefund, with a minimum value of €15,000. Last year’s competition was won by Samara Ward, from Inver in Co Donegal, who had finished as runner-up in the competition the previous year.

The winner on that occasion was former Irish Times marketing executive Emma Ferguson, who revealed that her winning loaf had gone through no fewer than 18 recipe changes.

The judges will be looking for a loaf made to an original recipe, with something that sets it apart. The dry ingredients in Ferguson’s winning loaf included brown and white flours, chia, flax and poppy seeds, wheatgerm, porridge oats and pinhead oatmeal. “Because the seeds can make it heavy, I added baking powder as well as bread soda,” Ferguson said. It was sweetened with small amounts of treacle and brown sugar, and the wet ingredients were buttermilk and eggs.

You can enter at aldi.ie/brown-bread-competition or see ica.ie for information on the competition, how to enter, full terms and conditions and competition rules.