Loam: A culinary treat in the west of Ireland

This is detailed, precise cooking at a very high level, with outstanding wine pairing 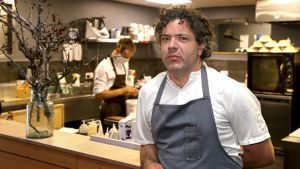 When it comes to fine dining, customers fall into two distinct camps. There are the people who stop for a “told you so” burger on their way home, still hungry after an evening of artfully tweezered morsels, and those who waltz out on a personal cloud of smug, having fully “got” each dish.

These are, of course, extremes. Sometimes you land in the middle, and for me, the conceptual dish too far was the much lauded dessert at Grant Achatz’s Alinea in Chicago that followed an otherwise incredible meal. Sweet, bubble gum flavoured coloured stuff was splattered, Jackson Pollock-style, onto our table. Theatre yes, art maybe, dessert no.

There is also a danger with tasting menus that the diner can run out of steam before reaching the final culinary hurdle. A bit of editing on the chef’s part can help, while sitting down and putting themselves through the potential tyranny of eating the full menu can be illuminating.

Tyranny is far from my mind when I book Michelin-starred Loam as the culinary treat during my holidays in the west. It’s a Friday, and the only option is a seven-course tasting menu (€78). Add €41 for the wine pairing. A word of warning, wine pairings can sometimes be a price gouge, but here they are a well-priced opportunity to try beautifully made, well matched, low intervention wines.

Amuse bouches, which include a crisp gougère filled with a warm stream of Derg cheese, are followed by a fresh taste of new season tomatoes. A nowhere-to-hide dish, they are served simply in a cold tomato broth, with a small pristine oyster, a quenelle of horseradish cream, and tiny, fermented gooseberries, which add a sharp bite. A Basque wine, Hondarrabi Zerratia Txakoli, is a fresh accompaniment.

Fish also features in the next course, with squid cut into fine noodles, in which nestles an egg yolk cooked slowly at a low temperature. An intense shiitake broth is poured over, magically unifying the rich, salty and savoury flavours, which are paired with an orange wine from Slovenia, Piquentum Malvazija.

Someone obviously has a good knife in the kitchen. The beef sirloin tartare, which is hidden beneath ethereal squiggles of smoked bone marrow butter, is chopped into small, precise cubes, with tiny bits of dehydrated onion adding texture. It works well with the Guimaro wine pairing, a light, crisp red from Ribeira Sacra.

The next course could be described as a pause, something to give your palate a bit of a rest. Pointed cabbage, which seems to be the vegetable of the moment (a position I’m not quite sure it has earned), is grilled to bring out a richness, and combined with kelp, a kick of sour redcurrant, and an incidental piece of scallop. Scallop isn’t the headliner; it just seems redundant. The wine pairing with this dish is interesting, Altares de Postmarcos Albariño, which is rich and textured, quite different from the more typical fresh style.

Avignonesi, a Sangiovese wine from Tuscany, signals that a dish with more weight is coming. And this is where things can go horribly wrong. Too often, the meat course in a tasting menu is a disappointment, but not today. A beautifully cooked, pink lamb loin is accompanied by a creamy turnip purée, the broad beans taste like they have just been podded, and a mint sauce echoes the taste of summer. It is clever cooking that catches a moment in time, focusing on the vegetable elements, and using just enough protein to punctuate the dish. Although I do have to admit, I was yearning for just a little bit more of that lamb.

Desserts are a series of small dishes, none of them referencing art. The frozen sheep’s milk yoghurt with blackcurrant and shards of mint ash meringue is a nod to Noma, where chef and owner Enda McEvoy spent some time. A beautifully perfumed verbena ice-cream, with raspberries, pickled strawberries and a fresh crunch of peach leaf tea granita is paired with a sweet Jurançon from Domaine LaPayre. Petits fours are a small barley ice-cream sandwich and buckwheat madeleines.

This is what many would call cheffy food, but rather than shout look at me, it is refined. McEvoy is an intuitive and naturally talented chef who has a keen sense of the ebbs and flows of a tasting menu. And in case you’re wondering, no, I didn’t get a burger on the way home.

Dinner for two with one wine pairing was €197.