The best burger in Ireland revealed 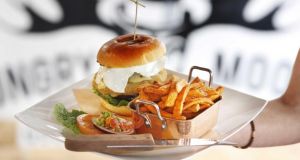 The best burgers in Ireland can be found at the Hungry Moose in Kilkenny, a partially crowdfunded restaurant opened last December by a chef who has cooked for rock and rap stars including the Rolling Stones, Meatloaf, Paul McCartney and Jay-Z.

The runner up is Handsome Burger in Galway, and Eddie Rockets is the people’s choice for best burger in a national chain.

Almost 17,000 online votes were cast by the public in the competition, which is part of tomorrow’s National Burger Day. More than 500 outlets nationwide, from high-end gourmet burger restaurants to local takeaways, will be offering two-for-one on their signature burgers tomorrow to mark the occasion. The full list of participating outlets can be seen here.

Telford has toured the world working as a personal chef for rock stars and bands. He and Brown worked together at the Mount Juliet hotel and resort in Thomastown, Co Kilkenny, where Telford ran a cafe catering to golfers and Brown was a management accountant.

The pair took over the running of Shirley’s pub in Kells, Co Kilkenny in 2014, and developed a pub food menu that proved popular with locals, prompting them to develop the concept of a burger restaurant. They launched a crowdfunding campaign in July of last year, and raised €22,840 which part-funded their opening on John Street in the city in December.

The runner-up, Handsome Burger in Galway, is a business created by Rory McCormack and Cathal O’Connor which grew out of a market stall and is now based at craft beer bar Caribou.

The best burger sold in a restaurant, as voted for by the public, is sold at Thunder Road Café in Dublin’s Temple Bar, while the Woodenbridge Hotel in Arklow topped the hotel category, and The Cross in Drogheda took the pub honours.

Eddie Rockets was voted best burger at a national fast food chain and the independent chain winner was Matt’s takeaway in Donegal. Burger King at Applegreen too the convenience store/forecourt category.

Regional awards were also made in the competition, which is sponsored by Kepak and supported by Coca Cola, Heinz, Dubliner Cheese and Tour America.

Best national burger at a …

Munster: Sun of a Bun, Cork