Sweet desserts to swear by

Star anise raises the bar in these elegant little pots of luxury, perfect for dinner parties 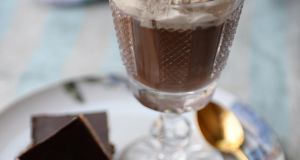 I’m not proud of it, but if pushed, particularly in the hothouse atmosphere of a kitchen, I can swear like a sailor. Actually, I don’t need to be pushed hard. I have a potty mouth.

To be fair, in Ireland, cursing is almost a national pastime, and in most professional kitchens, no one would blink an eye any way: colourful language is common.

But of course the home kitchen is a different environment altogether, particularly in this era of open-plan living, where there tends to be someone close by at any time. So it’s a habit I have tried to curb, if only because having small ears does not mean they hear any less. And it is never a good look for any mother to be told off for swearing by a precocious five-year-old or worse, by a knowing, smug teenager.

But back to swearing. Sometimes I swear because not because I’m cross but because I am utterly delighted with something. This can range from an unexpected phone call from someone I love, to some small professional victory, to a recipe that manages, somehow, to be everything I wanted it to be when I first set out and put pen to paper to write out the ingredients, hoping for the best.

And so it was that I found myself uttering a stream of the very best swear words (I like to call them superlatives) when I tasted the results of my first recipe this week. These chocolate and star anise pots are to die for.

Full of cream and dark chocolate, they are the essence of luxury, but it is the star anise that raises the bar, giving them a warm, aniseed undertone that is, frankly, irresistible.

In another, less worthy dessert, the mascarpone topping could be over-egging the pudding (pun intended), but here it is perfect. These are elegant little pots, too, so think of them when friends come over .

The second dessert is another smasher, not just because these bars taste great, but because they don’t even require cooking.

The magic happens not in the oven but the fridge, where the nuts, dates and other ingredients coalesce perfectly, and the dark chocolate topping sets just enough for it to crack when you bite into it.

H. pylori: tackling the germ behind stomach ulcers and cancer
8