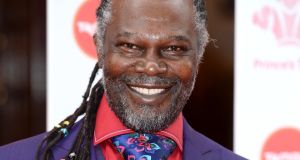 He found fame and fortune after appearing on the small screen and securing an investment for his Reggae Reggae sauce on Dragons’ Den, but now Levi Roots has inspired leading British filmmakers to tell his extraordinary story on the big screen.

Meg Leonard and Nick Moorcroft, writer-producers of some of the UK’s most successful independent films, are planning a film for cinematic release to tell Roots’ story: how he went from a child in Jamaica who was too poor to buy shoes and could not read and write when he emigrated to Britain aged 11, was later sentenced to nine years in prison for drugs offences, to turning his life around, and building a Caribbean food and drink empire worth £35 million (€40.5 million) following his appearance on Dragons’ Den.

Moorcroft said it would be a “life-affirming tale of hopes, dreams and second-chances, all set to an uplifting reggae soundtrack and bathed in Caribbean sunshine”. It will be filmed next spring in Jamaica, as well as Britain, particularly around Roots’ home in Brixton, south London.

Roots, a musician and chef, said that being immortalised on screen is overwhelming: “It’s ‘fab-ilicious’, which is that sweet point between fabulous and delicious . . . It’s amazing.”

He was selling his homemade sauce at Noting Hill Carnival when he was talent-spotted for the Dragons’ Den in 2007. After serenading the dragons with his guitar, he whetted appetites for his sauce, securing a £50,000 (€58,000) investment from Peter Jones. The Reggae Reggae brand now has more than 50 products.

Leonard and Moorcroft – with producer James Spring – are building on the success of films such as Fisherman’s Friends – based on the true story of singing Cornish fishermen starring James Purefoy – which has so far grossed £7.2 million in the UK, ahead of its forthcoming worldwide release. Finding Your Feet, their romantic comedy starring Timothy Spall, made £5.85 million in the UK and $18 million (€16 million) worldwide. Most home-grown independent films pale against such figures.

Although their new film is a comedy drama, it will show Roots’ tough life, from extreme poverty to violence. Like many of the Windrush generation, he grew up in Brixton at a time of political and social unrest, and was arrested during the 1980s riots. He found success as a reggae artist – singing “Happy Birthday Mr President’ to Nelson Mandela – but his music career was cut short by his time in prison. He describes this as his high point, because he turned his life around there, after “going in a very bad boy”. He converted to Rastafarianism and came up with the idea of a jerk sauce inspired by his grandmother’s Caribbean cooking.

A 2011 high court case in which he was accused of stealing his “secret recipe” from a former friend was his lowest point, he says. “I was the most famous black man in the country that didn’t kick a ball or run fast. I thought everything was amazing and I could relax . . . Then one of my mates threw a spanner in the works.”

Most painful was disappointing his beloved mother and the Caribbean community, who were so proud of him: “Her son was in court . . . My world came crumbling down. Maybe I should have said that I tried to ‘recapture’ my grandmother’s flavours . . . [rather than] ‘her recipe’. Then the judge said this is not a recipe that you can actually protect. He believed it was my work that created the sauce and the brand.That’s why I walked away with victory.”

Leonard described Roots as the “embodiment of triumph over adversity”. “It’s a classic redemptive tale, and so relevant.”

Despite difficult chapters, his story will be told as a comedy “because it’s life itself”, Roots said: “You have to laugh at yourself. I would love it to show the warts and all.”

He would like an unknown actor to play him on screen, and might take a cameo role – “maybe a bumbling takeaway shop owner who never has anything on the menu,” he laughs. – Guardian