Food File: Dublin will host a glut of international chefs for Guinness’s beer and meat festival 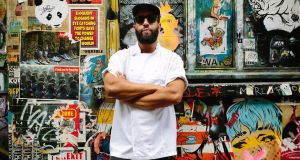 Event organiser, party planner and chef Andrew Rudd is expanding his business beyond Medley, his multi-purpose venue in the former Irish Times building on Fleet Street East in Dublin 2. He is now hosting events at The Complex, an arts centre in Smithfield in Dublin 7, as well as at Ballintubbert House & Gardens in Stradbally, Co Laois.

The Complex has capacity for 450 guests, while Ballintubbert is a more intimate venue, particularly suited to weddings and private house parties. To cope with demand, Rudd has also expanded his team, and Medley Events now employs three event planners, a consultant wedding co-ordinator, a head of beverages and four chefs, as well as administration staff.

Last summer the events crew looked after all of the arrangements for a party of 30 from Michigan, who were in Ireland for 12 days. Rudd had worked as a private chef for them on a previous visit to Ireland, and on this occasion they hired him to look after every detail of their stay, which included 26 events and excursions, including musical performances by Brian Kennedy and Mundy, the Dublin Gospel Choir singing at Mass in the castle, a London bus serving afternoon tea, a barbecue on an island, a fourth of July party and a medieval banquet with guests dressing in costumes.

“They were planning a family holiday and asked me to locate a castle and to coordinate and plan the entire holiday. We rented Lough Cutra Castle, and arranged everything from airport transfers to daily activities, menu planning, and event management. I had a dedicated production manager working with me for the duration,” Rudd says.

Wine consultant and former sommelier Fanny Wennerstrom, who studied at the Stockholm Restaurant Academy and is now based in Galway, is teaming up with Sheena Dignam and Gosia Letowska’s Galway Food Tours for a wine and food tour in the city on Thursday, May 16th.

It will visit three restaurants – Ard Bia, Merrow at Pálás and Kai. At each, food will be served and two wines will be poured, one that Wennerstrom describes as “a classic beauty” and a second from the low intervention, natural wine spectrum.

The line-up has been revealed for Guinness X Meatopia – the festival that celebrates meat and beer, cooking over fire, and music – which returns to Dublin from July 5th to 7th. For the third year in succession, the festival will be staged at the Guinness Open Gate Brewery at St James’s Gate.

This year the chefs and the brewers taking part are being challenged to create unique brews and dishes for the event and to pair them with each other. The pairings will be once-offs, and available only for this event.

David Thomas is bringing his “modern soul” style of cooking from his Ida B’s table in Baltimore in the US. Irish chef Anna Haugh, whose London restaurant, Myrtle, opened this week, will also be taking part, as will Grainne O’Keefe of Clanbrassil House in Dublin 8.

London’s restaurant scene will be further represented by Will Bowlby, head chef at Kricket in Soho, which marries British ingredients with Indian flavours and spice in a menu of small places, and by Great British Menu winner James Cochran, head chef at 12:51 in Islington, where the food reflects his Kentish, Scottish, Caribbean roots.

Malcolm Lee, head chef at Michelin-starred Candlenut in Singapore, will also be manning the fires. His restaurant specialises in Peranakan food, which has origins in the Chinese immigrant community which settled in Singapore and Malaysia.

As well as cooking, the chefs will participate in the Meatopia Cutting Room Stage programme which will run demos, talks and discussions throughout the weekend. They will be joined by beer writer Melissa Cole, whose talk will be on the subject of so-called “driving beers” and how brewers are rising to the challenge of making low-alcohol brews with full-on flavour.

Tickets for Meatopia are now on sale online at guinnessopengate.com/journal and cost from €59.50, which includes admission, along with five dishes paired with taster beers, and a pint of choice.

Is it normal for a woman to fart when she orgasms?
Real news has value SUBSCRIBE