Should your pasta drip like Colin Firth as Mr Darcy? The eight rules that explain it all

How to make perfect pasta, plus recipes for double tomato sauce and courgette-almond pesto 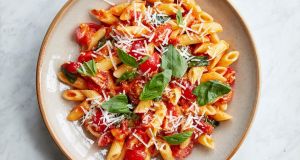 A few days after we bought our cooker, a book arrived in the post. The cooker was a secondhand Gasfire Cucina – identified by the man who came to service and fit it (a 40-minute job that cost twice the price of the cooker) as one of the last to be made entirely by hand before the factory was mechanised in the late 1960s. The book was In The Kitchen With Love, Sophia Loren’s first cookbook; a surprise gift from a woman called Cathy Whims, whom I’d met at a lunch.

A cooker and a cookbook: the two were already related. They were also both beautiful, singleminded, previously owned, smelled vaguely of well-done toast, and both special (one handmade, the other first-edition). Add to all that the proximity of their arrival and the fact that the book was first published the year I was born.

Also, that Loren, too, had a Gasfire cooker, larger than mine, with hub-cap-like vents and two ovens, and that features in three of the book’s eight colour plates so saturated with colour and flair, they seem to glow and throb. It is my habit to look for messages – in clouds, coincidences, song lyrics, the condensation on train windows – a habit that verges on superstition at times.

But there was no doubting that there was significance in it all, and that Loren, her chin resting in her hand, her elbow resting on a table heaped with vegetables and dry spaghetti threatening to slide off, was glowing and speaking directly to me.

“Here are the rules that I want to suggest to you,” she writes at the start of the pastascuitta section in her book, some of which I don’t agree with – so I share my own pasta rules with you here.

1 You need a large pot with plenty of water, so that each sprig of pasta can cook separately, free to move in the water without clustering. I never imagined I would be so dedicated to pasta, but I am, and putting on the water for it marks the middle or end of our every day. I have a lightweight pan that holds six litres, but as I am usually cooking 400g dried pasta, I fill it with four litres (one litre for every 100g pasta).

2 Add salt (10g for every litre) when the water is boiling – this will increase the violence of the boiling.

3 Turn the flame even higher to compensate for the fall in temperature when you add the pasta.

4 As you add the pasta, stir to spread it out.

5 Keep a careful eye and pay more attention to tasting than to the manufacturer’s timings; taste and taste – it should be firm, but not raw.

6 This is where is Loren and I disagree – disagreement being a fundamental tenet of home cooking. She suggests adding oil to the cooking water to make the pasta more “mobile” when adding sauce; I keep back the starchy pasta cooking water, which I then add back to the dish if it needs loosening.

7 Careful draining. Again, I disagree with Loren here, because it depends on the dish. For some pastas, dripping like Colin Firth as Mr Darcy emerging from a pond can be a bonus. Courgette pesto, for example, a vivid green, pounded sauce that owes everything to classic basil, pine nut, garlic, olive oil and pecorino, but replaces some of the basil with grated courgette and some of the (fiendishly expensive) pine nuts with almonds. Pasta dripping with starchy cooking water (helped by the addition of a diced potato) is required for the dish to have a soft swish, and to curl it around a fork. When it comes to double tomato sauce, on the other hand – a Puglian recipe via Emiko Davies, in which the pasta is layered with an olive-oil-rich cooked tomato sauce and a raw one; also gratings of salty cheese – well-drained pasta is key.

As is 8: waste no time in mixing the pasta and the sauce and bringing it to the table, steaming hot. Use the rest of the pasta cooking water to do the washing up – and to wipe the red or green splatters from the cooker, but not the book.

Method
1 First, make the cooked sauce. Peel the fresh tomatoes by plunging them into a pan of boiling water (save the water to cook the pasta later) for one minute and lift out into cold water, at which point the skins should slip away. Roughly chop, discarding any hard bits.

2 In a large, deep frying pan, heat six to eight tablespoons of olive oil and fry the garlic for a few minutes. Add the chopped fresh and tinned tomatoes, a pinch of dried red chilli and a pinch of oregano, and simmer for 20 minutes, pressing the tomatoes with the back a wooden spoon or potato masher, until rich, saucy and to your liking. Pull from the heat.

3 For the raw sauce, quarter (or eighth, if they are big) the fresh tomatoes over a bowl to catch the juices, add a good pinch of salt, four tablespoons of olive oil and lots of ripped basil, and leave to sit while you cook the pasta.

4 Bring the pan of water back to a boil, add salt, stir, then add the pasta, cook until al dente, then drain.

5 Spread a little cooked sauce in the base of a shallow bowl, add a layer of hot pasta, then some uncooked sauce, a grating of ricotta . . . Continue layering like this until all the ingredients are mixed, ending with cheese and some basil leaves.

Method
1 Bring a large pan of water to a boil for the pasta.

2 Wash, top and tail the courgettes, then, using the coarse side of a box grater, grate into a clean tea towel and squeeze all the excess water out.

3 In a blender or mortar, blitz or pound the nuts, garlic and a pinch of salt until the mix resembles a coarse rubble. Add the courgette, basil and oil, and blitz or pound again, until you have a rough, vivid-green paste. Scrape into a large bowl, stir in the cheese and taste for salt.

4 Salt the boiling water and cook the pasta, adding the diced potato, too, until the pasta is cooked but still has some bite.

5 Drain the pasta (saving some of the cooking water) and combine with the pesto. Swirl it around, and add more pasta cooking water to achieve a soft, swishy texture. Serve immediately. – Guardian