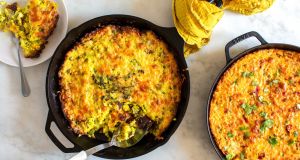 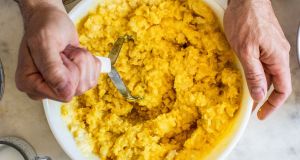 The potatoes are mixed with cream, eggs and cheese and mashed until still lumpy. Photograph: Andrew Scrivani/The New York Times 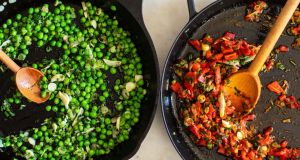 Peas and roasted peppers are prepared for use in a cheesy potato cake. Photograph: Andrew Scrivani/The New York Times

Plenty of food debates were going on in our house during the recent lockdown. Unlike in normal times, when the kids were presented with their dinner, no questions asked, we found time to play restaurant (while badly missing the real thing) and discuss the next day’s menu in detail.

Like many boys his age, our youngest son, Flynn, who is four, would present a wish list of items that were exclusively carby and wholly white. Doughboy, as we like to call him, would ask for naked bread to start, followed by “pasta with nothing”, then plain potatoes and, to finish, a slice of cake, ideally served with leftover pancakes from breakfast.

Particular as all this may sound, I am not entirely sure that this starchy obsession is necessarily a Flynn thing, or even a four-year-old thing. As I was cooking one of his bread-centred meals, I was giggling to myself, thinking of some classic carb-on-carb extremes, such as the chip butty, a phenomenon I have managed to successfully dodge in my two decades in England. Or, I suppose equally bizarre to an outsider, the pitas I had growing up in Israel, stuffed with shawarma and salad, and then topped with lots of potato chips and an optional spoonful of fried pita croutons for crunch.

I would not consider either version of potato-meets-bread the high point of local cuisine, but the combination is undeniably satisfying. Perhaps more sophisticated, if I am allowed a little more judgment, are Italian flatbreads – focaccia or schiacciata – topped with rosemary, coarse salt and thin potato slices, evenly spread over olive oil-scented bread, locking in moisture and adding texture and their own subtle flavour.

Another example that I love is Tunisian fricassee, a sandwich made with bread rolls cooked in oil, just like doughnuts, and stuffed with tuna, cooked potato, black olives, boiled egg and a spoonful of spicy harissa. It isn’t very difficult to imagine how delicious these are.

Satisfying Flynn’s starchy needs also made me think of maaqouda, another North African staple. These are little fried mashed potato cakes or fritters, often sold on the street, either on their own or stuffed into bread with harissa or tomato sauce. I had the sandwich version a few times in Tunisia and Morocco and never felt a carb overload. Just like a good potato focaccia or a fricassee, the secret lies in a fine balance of textures – a little doughy, not at all dry, with a tiny bit of crunch – and a clear underlying flavour that holds everything together, from the rosemary or the harissa.

Re-creating traditional maaqouda was a lunch plan I had one day, before I quickly backtracked after realising that Flynn may not be getting all the nutrients he actually needs – horrific scenes of scurvy came to mind – if I stick strictly to his dream menu. Instead, I made a large baked version, into which I added ingredients I had on hand: cheese, herbs, spring onion and lots of frozen peas. I slid the mix into hot oil before it went into the oven, which kept some of the fried effect on the outside.

My compromise version of maaqouda was, generally, very well received and became a blueprint for future meals, where I folded in different ingredients I wanted to use up. (Spinach worked well, as did roasted pepper and corn.)

Flynn, however, wasn’t totally impressed. “Too many peas,” he exclaimed.

He did insist, though, on having the leftovers stuffed into a sandwich that evening, with some ketchup, which kind of worked.

Method
1. Add the potatoes to a large pot and top with enough water to cover by about 4cm. Bring to a boil over medium-high, then lower the heat to medium, cover with a lid and cook until easily pierced with a knife, about 30 minutes. Drain well. Once cool enough to handle, peel the potatoes (saving the skins for another use), and transfer them to a large bowl.

2. While the potatoes are cooking, add half the olive oil to a large 30cm cast-iron frying pan or an ovenproof dish that is at least about 8cm deep. Heat over medium. Once hot, add the spring onions and garlic and cook, stirring occasionally, until soft and lightly coloured, about 6 minutes. If making with peas, add the peas and thyme; if making with peppers, add the peppers, cilantro and harissa. Add ½ tsp salt and plenty of pepper, stir to combine and set aside.

4. Add the cream, eggs and yolk, Parmesan, preserved lemon, turmeric, half the Cheddar and ½ tsp salt to the potatoes in the large bowl. Use a potato masher to break everything down to a rough mash that is still a bit lumpy. Add the feta and the spring onion mixture and fold everything together.

6. Reduce the oven temperature to 205 degrees and bake the cake until golden and bubbling, 25 to 30 minutes. Remove from the oven and set aside for 15 to 20 minutes to firm up before serving. Sprinkle with the extra cilantro, and serve warm, spooned directly from the pan. – New York Times