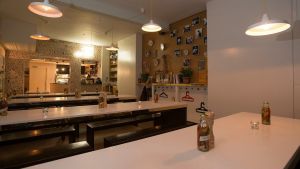 The waiter has made me feel like I’ve won at ordering. His nods and encouraging words suggest I’ve just made the coolest set of menu choices in the history of dining. It’s a good tableside manner to make an eater feel at home in a new place.

There are asterisks beside some of the dishes on the menu at Hey Donna. These are the “staff picks”, nudges in what is hopefully a good direction. The cynic in me wonders about this kind of pitch. Are bookshop staff picks truly the books where the staff loved every page or just the stock that needs shifting before the next wave crashes? And hang on one beef-braising minute – shouldn’t every dish be a winner?

Cynicism on the back burner, Hey Donna feels like a place where everyone is feeling it rather than emailing it in. It’s restaurateur Joe Macken’s latest idea, housed in his former Jo’Burger on Rathmines Road. The dark, clubby burger joint has been stripped out, painted white and dialled down in a look so subtle the name is the shoutiest bit. It’s walk-ins only for the moment, and we sit on treacle-dark backless benches at long white tables. If you hate budging up to make room for a stranger (flashing that lubricant smile of shared table restaurants that says “I’m pleasant but don’t fret, I’m not going to talk to you,”) go for the smaller benches. With some galspreading you will probably get to keep one to yourself.

The menu is a flurry of ideas with more than a genuflection to the god of small plates, his highness King Yotam. But this is more than a half-baked tribute sprinkled with sumac. Lots of restaurants say they’re putting vegetables centre stage and then lapse into a rendition of Old McDonald’s farm. Here’s one that actually takes us a good halfway down the list before we encounter anything that once had a pulse. I like the cut of this menu’s jib.

Not that there isn’t meatiness (and actual meat) here. The meatiness is in the “tartine’s mushrooms”. Confusingly for someone who loves Tartine bread, these don’t contain any bread. They’re Bar Tartine’s mushrooms, a bowl of halved mushrooms pickled in a vinegary dressing that’s almost sooty with smoke and heat from paprika, garlic and pepper. Next time I’m ordering the house labneh (a staff pick) as balm to their fire.

I make do with the sheep’s yogurt that has been raspberry rippled with “ember baked beets”, a great big slab of slowly roasted beet, skin still there bleeding sweet purple juice into its bed of cloudy yogurt and topped off with pistachio and fennel. There’s a quarter of a cauliflower, roasted like a slab of meat and then placed in cashew butter and a yogurty roasted-pepper sauce. Our one meat choice is the hot beef ribs, hot only in temperature but excellent meat typically sliced from the shoulder so full of sinewy flavour that needs a slow, careful cook. One plate is more than enough for two, and at €14 that’s a proper bargain. Fried potatoes taste like the cook’s bonus bits, crunchy bits of spuds that have been nuzzled up to a great lump of roast as they cooked.

In the middle of all this properly tasty stuff there are two paler renditions of dishes that a kitchen like this could very easily nail. The first is a baba ganoush, a creamy, smoky mush of aubergine jewelled with pomegranate seeds but crying out for a bit of salt. Once we add some, it’s fine. The second is the bagna cauda – Italian for “warm bath” – a Piedmontese speciality born of a delicious deal between fishermen who traded anchovies and the salt needed to make butter with their inland dairying neighbours. To preserve them, the anchovies were turned to a buttery, milky garlicky paste that could be used on pasta or for dunking your roasted cauliflower. Hey Donna’s has almonds in it but is just a bit meek, a signature dish written timidly in HB pencil rather than slashed across your taste buds with a fishy flourish. Make it more outrageously anchovy-ish please.

There are no desserts on the menu, so they assemble one at the table for us. They’re trialling the idea of a “whip du jour”. It’s a peach melba-style layered number with crushed biscuit, spiced pineapple, ginger and cardamom cream squirted from a cream soda syphon before being sprinkled with sugared fennel seeds, all made up in front of you. This dessert’s a keeper, both method and recipe. The only annoying thing is that it doesn’t appear on the bill as it’s still work in progress.

The menu changes frequently, they promise. It’s already several streets ahead of other casual restaurants in this price range. Cheap and properly cheerful Hey Donna is a class act.

Price: Dinner for two with a beer, sparkling water and house lemonade came to €59.50

Facilities: Small unisex and a sink full of bay leaves and a halved lemon (maybe to distract from the tap, which is little more than a trickle)

Music: Nice but hard to hear as it gets busier.