The Ramen Bar review: Try this ramen bar that makes soup for the soul

Japanese noodle soup hasn’t become as fashionable in Dublin as it is in London, but it is certainly trending here, and this little eatery has it nailed 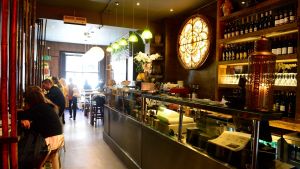 There’s a high sweet smell of sushi rice, ginger and fresh fish when you walk into the Kokoro Sushi bar on South William St in Dublin’s city centre. But we’re heading down the back where the lower notes of long-simmered broth linger. The Ramen Bar is a secret (ish) cavern in the rear of this bright white-painted building, advertised with just a small neon sign at the front. It has the feel of a speakeasy where those who know ramen go for big hot bowls of noodle soup.

It’s all rough-hewn dark wood benches and tables down here, with a line of paper lanterns above us and bamboo framed light boxes hanging down over the high tables. The paper placemat menus boast “Ireland’s first” ramen noodle-making machine which they say they use to make their noodles in house. Tonkotsu soup, or pork and vegetables simmered for 14 hours, is the house speciality.

It feels like the season for soup, the long-sleeved jumper of the food world.  And there’s something especially autumnal about the pork ramen. It comes with a rough-hewn ladle on a straight handle. Press the ladle down on the noodles and bean sprouts and it fills with a liquid the colour of milky tea beaded with golden drops of pork fat.

“The broth is the best part,” the nine-year-old says as he inhales his miso salmon version, with the full Kung-Fu Panda slurp-ah treatment. This comes after he earns himself “most indiscrete dining companion of the year” award by urging (at maximum volume) his younger brother to eat the freebie chicken yakitori skewer “because Mum’s reviewing it”. Nobody bats an eyelid. I hiss at him to keep it down and the youngest fella’s eyes widen. “We’re like spies?” he says, more than liking the idea.

Our dossier contains good news. That chicken skewer (not critic bait, everyone seems to get one as a surprise free starter) is made from shards of brown thigh meat with a toffee sticky ginger and sweet soy dressing speckled with sesame seeds. A plate of edamame beans (or Enda Kenny beans in our house) are piping hot and served straight out of the steamer and dusted with crisp salt flakes.

There’s a kids bowl of chicken ramen which has more basic ingredients in it but is still the same size as the full-price bowls. Chopsticks are tried but fingers and a plastic fork are the more efficient tools. The youngest tries out his ladle by posting the whole of it into his mouth like a horseshoe swallower in a circus act.

There’s a Sheryl Sandberg school of ramen eating going on at the tables around us. Everyone is leaning in, spines curved as they hunch over steaming bowls to lift noodles to mouth with chopsticks and use the ladle to slurp up the good stuff.

Those noodles are terrific, nutty and rightly rubbery, absorbing the broth enough to flavour them but not so much that they lose their bite and dissolve into flaccid stodge. Some diners are using their ladles to curl the pork belly around crunchy beansprouts and a tangle of noodles to make a pork roll. The pork ramen is topped with a seasoned egg cut into two halves to reveal a fudgy soft yolk, the outside of the white has been stained eggshell brown by its soy-based marinade. It takes the umami of the egg down another satisfying notch or two. This is comforting. Swap the pork for rashers and ramen is a sort of breakfast roll in soup form.

The salmon miso version has been lightly spiced with well-judged amounts of red chilli and the broth is very good. It compensates for the fact that the grilled slab of salmon fillet on top is overcooked to the point where it would be too dry to serve without its bowl full of broth underneath. I’d like the chicken broth in the kids’ bowl to have a bit more bony chicken depth to it but it’s a good starter bowl for a ramen newbie.

Desserts are surprisingly good, western staples but with an Asian slant. There are only two, a luscious ginger- laced chocolate brownie and a fluffy cheesy lime and coconut cheesecake which hasn’t been killed with an overload of sugar and a blancmange texture as so many cheesecakes are these days.

Ramen hasn’t become as wildly fashionable in Dublin as it is in London. Maybe we have cultural baggage about soup, especially the watery variety that you get in a ramen bowl. But this is soup with soul, a depth and flavour that you don’t typically find in this price bracket. By all rights The Ramen Bar should be rammed. They are doing it as it should be done.

Lunch for three with soft drinks and dessert came to €50.05.