Nobelhart and Schmutzig review: Berlin’s answer to Noma with a tasting manifesto to boot 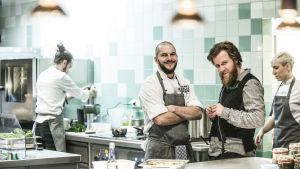 Here’s a sauce so inkily green it could be used to write vintage hate mail. It’s staining some freshly marinated trout so intensely it looks as if someone has tipped a bottle of food colouring over my dinner.

I’m in Nobelhart & Schmutzig a restaurant that sounds like a pair of Muppet characters but is a new face in Berlin’s high-end food scene. It’s something of a tribute act (there are more Nordic notes than in a gritty crime drama) but with enough of its own personality for the place to feel as vibrant as that epic sauce.

The essence of greenness is a kale concoction poured over a small piece of trout by the young woman chef who serves the dish directly from her kitchen station. The trout was caught yesterday, she says, and they just marinated it in salt “because we’re lazy chefs”. The fish is the colour of pale skin. It shows how great a humble trout can be when it’s eaten just a few hours out of water, with the exception of a few tooth-flossing bones that got away.

Nobelhart and Schmutzig (schmutzig is German for “dirty”) has the furtive look of a speakeasy or adult shop from the outside. White curtains obscure any glimpse of anyone eating. There are two things in the window, a small sign printed like a page of a book with the restaurant name on it and a headless torso wearing a black T-shirt with the words: “Who the fuck is Paul Bocuse?” written in white on the chest. Okay so no French cooking here then.

The 10-course menu is €80. There are some tables but most of us sit on wooden high chairs, made more cosy with sheep fleeces. These chairs are ranged around a thick wooden counter that runs on three sides of the large open kitchen. Phones are absent. “Please take memories not pictures” the menu asks.

Earnestness is a theme but it’s gentle and friendly rather than joyless and overbearing. The chefs speak flawless English and each dish comes with a small chat from the cook who made it. There are the three rounds of smoked eel topped with a tangy apple vinegar gel and radish sprouts. The more you chew the spicier the sprouts get. There are grape-sized chunks of Jerusalem artichokes cooked at three different temperatures so they’re caramelised, crispy and chewy. These knobbly delights come with a strained yoghurt from which the whey will be used later on. Then there’s a splodge of butter made from raw cream. It’s the kind of butter once made in homes all over Ireland before we outsourced butter to big dairy. It tastes even better as the night wears on and the warmth softens it to a more milky tangy taste.

Next I get a sniff from a kilner jar filled with oil with some sticks in it. They’re blackcurrant stalks and the smell is ripe sun-warmed fruit on a frozen Berlin night. The oil has been used to marinade fish roe. Smelling the oil is like hearing an instrument play solo before it joins the orchestra so you can better pick it out of the crowd.The blackcurrant flavour sings out from the pink paste of the roe slathered onto raw chicory leaves bedded into parsley butter. It’s a plate that puts you in a garden by the sea on a sunny day.

That whey from the yoghurt turns up in a pork bone broth to give it tang. The broth is poured onto bitter charred leeks topped with pork fat crusted with crushed fennel seeds.

Red cabbage soup comes in a beautiful ceramic bowl finished with a sandy glaze so it’s lovely to hold. There is no spoon. The chef who made it says he hates watching people eat soup with a spoon. So you drink from the tactile bowl like a Japanese toddler. Beaded across the top of the deep purple broth are tiny flecks of oil which come from the smoked eel bones which were added for around half an hour for a bonfire kick.

Finally comes the “promised piece of meat”, which is worth the wait. It’s pork from a breed of pig crossed with wild boar so it dies by being shot rather than in a slaughterhouse after a lifetime indoors. It’s the “one bad day” school of meat farming. And the firm but silken meat is testament to how much better happy animals taste. It comes with celeriac cooked to a caramel and a sprinkling of pine needles to keep us in the forest.

Two dessert courses round things off: a quince granita and a milk ice cream with willow and more quince and sliced carrots. Both are almost savoury. A take-home golf-ball sized pastry in a paper bag nails the sweet hit I crave after the walk back to my hotel.

The simplicity and clarity of the food here is welcome in a food scene mired in heaviness and Frenchified high-end dining. German food, like Irish food, gets a bad rap but Nobelhart & Schmutzig is as German as food gets: humble but heroic ingredients cooked with precision, craft and confidence. It’s a school of food that has a lot of nearly-there imitators. This is a restaurant doing it with an impressively whole heart.

Dinner for one with a glass of sparkling German wine came to €90.