There’s been a pub here on the Clancy Strand for many years, some say since the 1700s, but it has only been known as the Curragower since the Bourke family took it over in 1997 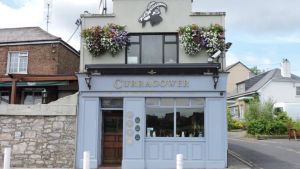 Looking out onto the River Shannon in Limerick City, across the water from St John’s Castle, is the Curragower Bar and Restaurant. There’s been a pub here on the Clancy Strand for many years, some say since the 1700s, but it has only been known as the Curragower since the Bourke family took it over in 1997. They took inspiration from the Curragower Falls on the River Shannon, where early farmers used as a crossing point for their goats at low tide. The name is taken from two Irish words; Curragh as in crossing, and gabhar as in goat.

When they first got the keys to the pub, it was just a small front bar with a house at the back for the landlord’s dwelling. The Bourkes extended the pub into the back house, and eventually continued the extension into the Georgian house next door, building a beer terrace on its front garden looking out over the river. Along with his business partner Brian Murphy, Cian Bourke inherited his parents’ refurbishments when they took over ownership of the pub in 2008. Under their watch, the Curragower has become renowned for its food offering, getting nods from McKennas’ Guides, Georgina Campbell and the Irish Restaurant Awards, among others.

The interior of the front bar is warm and sweet. Large wooden tables are decorated with petite narcissus in jars, reflecting the early spring sunshine that spills into the pub from its large windows. The walls are decorated with a plaster swirl, painted orange, an interior trait that could do with being updated, but otherwise it’s a handsome little spot to take in a bit of lunch or an early pub dinner, with food served every day from 12.30pm to 8pm. Curragower chef Barry Hayes has a selection of gourmet sandwiches, salads, soups and specials on offer for lunchtime, while an extended menu is offered at dinner time that includes dishes such as the Curragower Falls Burger and Dingle Bay Crab Claws.

A local tells me that the seafood chowder (€7.50) is a must, and it lives up to the hype. Too often, chowder is a sad, cloying mess of floury gloop but the Curragower’s bowl is an exercise in light yet hearty cooking. Pink pieces of salmon, plump mussels from Doolin and chunks of waxy spuds lie within the excellent creamy soup base. It’s a generous portion, served with two slices of good homemade brown bread, all together making for a lunch that is satisfyingly filling. A bowl of fat, golden chips (€3.50) make a great tool for chowder dipping.

The club salad (€11.90) impresses, too. This large plate of crunchy salad leaves is topped with strips of salty bacon and toasted croutons. Shredded chunks of moist free-range chicken soak up a creamy, smoked tomato dressing, while a hard-boiled egg makes this a salad your Granny would be proud to serve. Apart from that smoked tomato dressing, it’s enticingly retro, and is a celebration of simple flavours that have worked well together throughout the ages. The chowder and the club salad make an appearance on both the lunch and dinner menus.

There are plenty of craft beers chilling in the fridge, such as Dublin’s Five Lamps Lager, Stonewall Cider and the Limerick-brewed Treaty City’s Harris Pale Ale, named after local party animal Richard Harris, and there is Dingle gin and vodka on offer, too. My sparkling water (€2.50) is made by Fíor Uisce, an Irish company bottling at source from the mountains of County Mayo.

I’m not surprised that this pub has been winning awards. It’s the understated attention to detail that really catches my eye; that well-sourced bottle of sparkling water and the simple menu so expertly executed. The Curragower is most certainly a spot to put on your To Visit list.