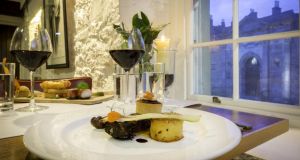 The annual St Patrick’s Day (Weekend? Week?) festivities grind into gear tomorrow morning. We know the man himself wasn’t big on snakes or slavery, but we have it on good authority he had a healthy appetite, so we’ve found some food-related events this weekend to remember him in style.

In Dublin, the St Patrick’s Festival has turned into a huge international affair with hundreds of events from 9am tomorrow morning.

Bia Beatha, the monthly exploration of the role of food in our history, culture and society, decamps from its home in the United Arts Club to take over the old brewers’ dining hall in the Guinness Storehouse tomorrow night. A three-course menu from Justin O’Connor will include Carlingford oysters, baby gem with Clonakilty black pudding and Ardsallagh goats cheese, Slaney Valley Lamb with barley risotto and poached North Atlantic Hake.

Culinary historian Máirtín Mac Con Iomaire will discuss Irish cuisine and how it has shaped us as a people, followed by live musical performances. From 7.30pm to 10.30pm, tickets €65, including wine.

A one-day celebration isn’t enough in Cork city either, and as well as the parade on Tuesday, there’s live music all weekend on Patrick’s Street and the Lee Sessions will take over a number of city pubs every evening. Food is featuring high on the agenda too, with many restaurants serving a special Irish dish during the festival.

Idaho Café on Caroline Street is showcasing Frank Hederman’s delicious smoked salmon, with crushed potatoes, Ardsallagh goats cheese and a green (but of course) leaf salad, €12; the Fish Bar at the Electric on South Mall is serving up oysters (3 for €6, 6 for €12, 12 for €24) with Guinness to mark the day, or you can take part in the Fab Food Trail, a walking tour of the city’s markets, bakers and fish, meat and cheesemongers with lots of tastings along the way. There’s a trail tomorrow, departing from Grand Parade at 10.30am, €55 per person, book at fabfoodtrails.ie

You can’t get more Irish than Kilkenny’s Tradfest, which runs from tomorrow until the 17th. Gigs, workshops, dancing, family events and ceilis take over the city for the festival, with all events on the Music Trail free of charge (so expect a tight squeeze). Watch out for Dylan Haskins and Lisa Hannigan’s Soundings: Holy Trinity show in the Long Gallery of Kilkenny Castle at 4.30pm on Sunday, with three musical guests who will perform and tell stories.

Afterwards, pop across the road to Anocht restaurant, in the 16th-century castle stables, for a three-course meal followed by a concert from Lumiere (Éilís Kennedy and Pauline Scanlon). Sittings for dinner at 6.15pm or 7pm (the table is yours for the evening) and the menu from Kathleen Moran’s team will include prawn and crabmeat with lime, apple & pecan salad on sourdough, and Paddy White’s beef short rib with carrot & parsnip puree, onion tart, champ & wild mushroom sauce. Tickets €45 per person, from 056- 7722118/info@kilkennydesign.com.

Galway’s festivities are centred around the city’s creative community, with lots of input from local cultural groups. Bádóirí an Cladaig Teo, which preserves the city’s maritime heritage, will have a 21ft Galway Hooker on display in Eyre Square for local buskers to perform on. Keep the hunger for creativity alive with some local fish tacos in Biteclub (36 Upper Abbeygate St, electricgalway.com/biteclub) which is open from 6pm Thurs-Sat, and 2pm on Sunday.

This “streetfood discotheque” is in the newly revamped Electric, a hub for creative types, and the top floor eatery blends really good food (a mishmash of Middle Eastern, Mexican and more) with excellent music and cocktails. On the menu, you can expect those delicious tacos (€8.50) with fish of the day, orange pico de gallo, chipotle crema on soft tacos; or try a bucket of crispy fried chicken, served with a side of chunky slaw (€9). There’s an all-day party on the 17th with margarita slushies to celebrate (well, they are green).