Workers who built the pyramids were paid in beer, and as part of food history project we set about brewing it as Egyptians did 3,000 years ago 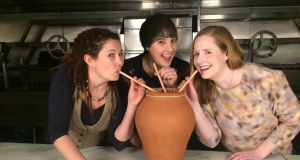 I’m standing in the middle of an early-medieval Irish round house. Its basket-like construction arches above me. The room is dark but shards of sunlight are streaming through a stone doorway and the thin branches which make up its tightly woven walls. It smells of something ancient and peat smoke but it is remarkably dry.

This house is in UCD’s Experimental Archaeology and Ancient Technologies research centre. To the untrained eye, the centre simply looks like a grassy field on the Belfield campus. But as Prof Aidan O’Sullivan points out, it is a field with a high-wire fence surrounding it, which means that durational archaeological experiments can take place. Students can learn first-hand how our ancestors prepared food, extracted iron ore and smelted it to make blades, how they constructed houses and what the remains of these activities and dwellings might look like now, centuries later. On a sunny April afternoon, it all looks idyllically bucolic – I’ve a feeling I might feel differently if I was here in November.

Surrounded by archaeologists, standing beside a stone fire pit in this dwelling, I’m in the middle of a heated discussion about how long it takes to warm a bucket of water using rocks. I am surprised at how enthralled I am and how completely fascinated and fascinating everyone else is.

If you are wondering how I have found myself in this situation, simply put, my journey into ancient history was inspired by a thirst for beer. For the past few months, I have been working with curator Tasha Marks, brewer Michaela Charles and a team of Egyptologists and bio-archaeologists from the British Museum. As part of a food history project called “Pleasant Vices”, we are re-brewing ancient Egyptian beer in central London. Hot water is an essential aspect of the brewing process, hence my interest in buckets and rocks.

Lots of other brewers have tried their hand at brewing ancient beers but unlike other re-brew projects, this one is inspired by artefacts in the museum’s collection, supported by rigorous research and backed up by a team of museum experts who make sure we don’t lose the run of ourselves and do something historical inaccurate or dare to make a decision that is not underpinned by 3,000-year-old evidence.

The ancient Egyptians knew a thing or two about beer. They drank copious amounts of it – the workers who build the pyramids of Giza were given a daily ration of a gallon and a third of the stuff and thankfully for us, detailed three-dimensional mini-model breweries remain. A lack of willing slaves meant I needed to curtail the scope of this project somewhat but even on a small scale I was determined to be as historically accurate as possible.

I had a point to prove. Archaeologists who have discovered the remnants of ancient Egyptian beer have described it as a low alcohol, thick fermented, porridge-like gruel which was drunk through straws to strain some of the floating particles. It sounded thoroughly unappealing and certainly not my glass of IPA. The idea of drinking 10 pints of it in payment for producing one of the seven wonders of the ancient world, frankly, seemed like an extraordinarily bad deal to me.

We have words for things that are good for us but taste horrible – medicine. Humans for millennia have cultivated a taste for the delicious. We have evolved our love of sweet-tasting things by seeking out the ripest-berries. About 10 million years ago, we differentiated ourselves from our primate cousins by acquiring the ability to metabolise alcohol, which enabled us to digest wind-fallen fruit without harm. Humans didn’t create alcohol, they simply discovered it among fermenting fruit and grain. If so much of this beer was consumed by the ancient Egyptians, and they spent so much time documenting its production, I was positive it was going to be a treat for the senses!

So, together with my crack team of experts, we set about designing our brew. We choose to use emmer (ancient precursor of wheat) and malted barley. These grains were cultivated in the fertile crescent thousands of years ago and there are examples in the museum’s collection. We had these stone ground and followed a two-step, warm and cold mash method laid out by archaeologist Delwen Samuel.

When sourcing a large terracotta pot without a drainage hole proved impossible, and unable to use one of the museum’s many clay fermenting vessel, in stepped Michaela’s dad, David White, a talented ceramicist. He threw us a vessel in keeping with a museum artefact. Our bubbling terracotta pot looked like something you might pick up in B&Q at the weekend, but this vessel was unlocking 3,000 years of brewing secrets. We inoculated the inside of the vessel with yeast harvested from another beer, covered the pot with some muslin and waited.

Just 48 hours later it was ready. Firstly, it was fizzy and cold, something I wasn’t expecting. The porosity of the terracotta vessel enabled a small amount to liquid to wick from its unglazed surface, keeping the vessel at about 10 degrees below room temperature. The beer is golden with a slight haze. We also brewed a version flavoured with a homemade dukkha spice mix of roasted pistachio nuts, cumin, coriander and rose petals, which was inspired by remnants found in royal tombs. Both are rather more inebriating than expected as the efficiency of the method resulted in a surprising percentage of alcohol. To see our tasting, Pleasant Vices is available to view on the British Museum’s YouTube channel from May 24th.

Other videos in the series cover aphrodisiacs, sugar and chocolate.