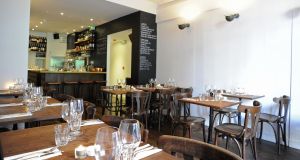 Etto Restaurant in Merrion Row, Dublin 2 is the RAI Restaurant of the Year. Photograph: Dave Meehan

Etto, on Merrion Row in Dublin 2, is Ireland’s Restaurant of the Year 2018. Simon Barrett and Liz Matthews returned from London to open Etto in 2013, and it has won the Best Casual Dining Experience in Dublin category at these awards, run by the Restaurants Association of Ireland (RAI), for the past four years.

Announcing the award, the RAI said: “Etto offers a daily changing, seasonal menu, served in a relaxed and informal environment and describe its dishes as honest and simple, using ingredients from local producers and suppliers where possible.”

The All Ireland Best Chef accolade was awarded to Jess Murphy, head chef and co-owner of Kai Café Restaurant in Galway. Kai was also singled out for Best Digital Marketing.

In its citation, the RAI said: “Murphy sources fresh, organic produce from local suppliers to create daily menus bursting with flavour, texture and colour. The judges were wholeheartedly impressed with Murphy’s commitment to high-quality, local produce.”

In this, the 10th year of the Irish Restaurant Awards, more than 90,000 online nominations were received for Irish restaurants and other hospitality businesses. The public vote was followed by judging panel assessment at regional level, and at national level there were mystery guest inspections and votes from the RAI’s National Judging Academy, made up of industry experts, food writers cuinary academics and critics.

More than 1,000 restaurateurs, chefs, front of house staff and industry figures attended the All Ireland finals of the awards in Dublin on Monday night.

A team of chefs, including several previous winners of the Best Chef title, cooked a six-course dinner for the finale at the Clayton Hotel, Burlington Road. The kitchen brigade included Danni Barry, whose restaurant, Clenaghans, took the Best Newcomer national title. Also in the kitchen were TV chef Gary O’Hanlon; Shamzuri Hanifa of The Cottage Restaurant in Carrick-on-Shannon; Keith Boyle of the Bay Tree Bistro in Waterford, and Elena Martinez of Crover House Hotel.

Liam Edwards, president of the RAI, said: “As an industry, the restaurateurs, pub-owners and entrepreneurs of Ireland continue to defy the odds. You strive to create jobs, expand upon Ireland’s understanding of food standards and world cuisine, all while maintaining exemplary customer service. Your support of Irish produce has never been greater and for this you should be wholeheartedly applauded.”

NATIONAL AND ALL IRELAND WINNERS

Connaught - Wilde’s at The Lodge

Pub of the Year winners:

Best Cocktail Experience - The Sidecar at The Westbury