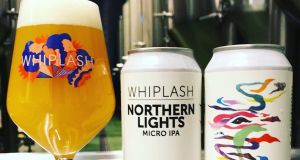 Whiplash’s Northern Lights Micro IPA is remarkably tasty, with a big hit of lovely hop aroma and flavour, a solid bitterness – and it’s not watery as you might suspect for such low alcohol content

If you fancy a beer with your dinner but have to be up early the next morning – or have things to do later in the evening – lighter alcohol is the only way to go. But there hasn’t always been much to choose from amongst craft offerings, many veering to the stronger side and even session beers varying wildly in terms of ABV.

Whiplash’s Northern Lights Micro IPA, which has just hit the shelves, has an alluringly low alcohol content of 2.8 per cent. “But it’s not a table beer,” explains brewer Alex Lawes, a style that is more like a light Belgian blonde or Grisette, he says. “We wanted to put the same amount of body into the micro IPA as an actual IPA.” And it is remarkably tasty, with a big hit of lovely hop aroma and flavour, a solid bitterness – and it’s not watery as you might suspect for such low alcohol content.

“The reaction has been phenomenal,” says Alan Wolfe, co-founder of Whiplash and formerly of Rye River Brewery. “It’s all about drinking to enjoy, not drinking to get drunk,” adds Lawes. Although they’re fond of making big beers too, particularly around 8 per cent, like their latest double IPA called Swoon. Interestingly, their bestseller is the Rollover 3.8 per cent session IPA – which could have something to do with the growing demand for lower-alcohol beer, particularly coming into summertime.

Operating as so-called gypsy brewers, they move between breweries – Rye River, Boyne, Rising Sons and presently out of Larkins in Kilcoole, Co Wicklow. So they’re not going with the whole idea of beer provenance then? “Well, we don’t have a brewery,” says Lawes. And anyway, they prefer to look to their playlists – as opposed to place names – for inspiration. “Most of our beers are named after songs,” he says. It’s worked well so far –  their Bone Machine IPA even got the Pixies talking on Twitter.