Paul Flynn: How to roast a cauliflower like a pro 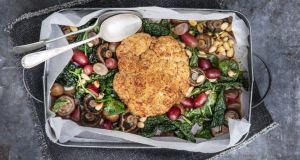 December for me is all about spices. In the Tannery kitchen you could tell Christmas is approaching even if you were blindfolded. The air is heady with expectation. The chefs are glad to be shielded from the cold outside, and there is a happy bustle.

The stars of the show are cinnamon, star anise and cloves, with bashful nutmeg appearing as a gracious understudy. The vast array of spices and various blends allow us keen cooks to really play with our food.

I make time to leaf through my cookbooks. People who truly love food cherish their cookbook collection. Delia is a Christmas goddess to me – if any proof were needed that I am old fashioned at heart. Her Christmas and winter cookbooks are unsurpassed. Diana Henry is another hero. Her books are inspirational treasures. I always have Nigel Slater close by too. His Christmas Chronicles is a fairy tale of the Christmas we all wish we had.

This to me is what seasons should be, each one with their own story. The dishes reflecting the weather outside. These couple of weeks approaching Christmas are all about preparation. Chutneys, pickles, jellies, fudges and mulled fruit. These can all be made and stored in the quieter days before the run up to the madness. Planning what you cook is half the battle and I am a compulsive list-maker.

I wanted to give you a vegetarian dish this week, just to settle those who may have non-meat eaters visiting. I’ve treated the cauliflower like a roast dinner. I wanted a meatless centrepiece that could be the star of the show even on Christmas Day.

I’ve come late to Middle Eastern flavours, a result, no doubt, of my rigid and sometimes insular classical French training. Thankfully, I’ve always been curious and hungry both for knowledge and the food itself. Dukkah is a wonder. We use it for many things. Its nutty, fiery crunch enhances dishes when the mood takes me. It is particularly good with roast root veg and salads.

The apple and cinnamon butter is a brilliant thing to have in the fridge for pâtés, cold meats or even grilled cheese sandwiches.

A little word on pears: I start mulling pears in the first days of December. I cheat by using mulled wine bought from a supermarket, then add star anise, cloves and cinnamon. In addition, a hint of orange peel, two fresh bay leaves and a spoon of red currant jelly enhance this liquor beyond belief. Get in early though, it sells out quickly.

The regal colour and musk of the spices permeate the pears so thoroughly it transforms them into a precious Christmas treasure. Peel the pears and simmer them in the mulled wine for 20 minutes, or until they are soft (the cooking time will depend on how ripe they are).

Method
1 Pre-heat an oven to 165 degrees Celsius, or equivalent.

2 Put the lemon zest and juice into a large bowl along with the paprika, cinnamon, olive oil, salt and pepper.

3 Rub this paste all over the cauliflower, making sure you get it into every nook and cranny.

4 Place the cauliflower in a casserole dish and pour the stock all around.

6 Remove the cauliflower, then add the spinach to the tray, turn in the juices and allow to wilt a little for one or two minutes over a gentle heat.

7 Season with salt and pepper, then spoon the mixture onto the centre of a plate, place the cauliflower on top, then scatter over the almonds and grapes.

Method
1 In a dry saucepan, lightly toast the sesame seeds over a low heat, until they begin to colour, stirring regularly. Set aside.

2 Melt the butter and allow it to brown a little over a low heat.

3 Add the cumin and coriander seeds, stir for two minutes, then add the nuts and sesame seeds.

4 Reduce the heat and cook for two minutes more; keep stirring. To finish, add the chilli powder and season with salt. This will keep for two weeks in the fridge.

Method
1 Melt the butter in a pot until it starts to foam.
2 Add the apples and the cinnamon and cook gently for two minutes.
3 Add the cider and sugar and simmer gently for 20 minutes until the apple has mostly broken up and the cider evaporated.
4 Blitz with a stick blender and place into clean jars.
5 Cool, cover and refrigerate.