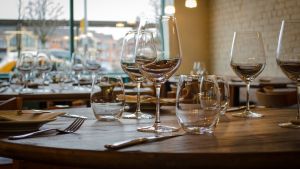 It’s hard to see how the three-course dinner will die, no matter how many small plates are flung in its general direction. It has the arc of a story: the hunger and excitement for the beginning, the longer (typically meatier) middle where we know the territory. And then a shift in tone for dessert, with maybe a cheesy epilogue to sharpen the appetite for a sequel.

But we are in Tasting Menu 2.0 territory these days. It’s a leaner, more nimble animal, evolved from the original beast of a dinner that left us pushing back from the splattered wreckage stuffed and drunk, the too muchness of everything part of the joy. Those tasting menu pioneers were deserving of a leather medal (which was always the proverbial reward in our house) for having stayed the pace.

Now, as the playwright Sonya Kelly said recently, the tasting menu is like a theatrical experience. It takes good raw ingredients, nerves of steel and great communication with your team. Something exciting has to happen every 15 minutes, she said, a description that nails it perfectly.

Ox is a European project in the best sense, Europe being the thing that has helped make the food of Britain and Ireland better

Tonight’s performance is at Ox in Belfast. It is the only Michelin-starred restaurant on the island of Ireland that hasn’t had its dinner offering reviewed in this column. Of course we know about Ox. In the weeks after it first opened six years ago I had a memorably brilliant lunch here. There have been dinners since but they were in the company of Alain Passard, two teams coming together to put on a show, the French impresario all twinkle and shimmy while his former understudy chef Stephen Toman cooked like his life depended on it.

Tonight is just a Saturday night in Belfast and the spartan high-ceilinged glass-fronted room is full of happy people. As I write this the final act of Brexit is still being written (or maybe just the run up to the interval), so who knows what fresh limbo we’re in now.

And that’s part of the reason we’re here, enjoying this place. Ox is a European project in the best sense, Europe being the thing that has helped make the food of Britain and Ireland better. It’s high-art French technique with its own distinct Belfast accent, the work of people from many countries grounded in pride of place and craft, those same things that got so warped by the unstoppable shuffle of the Little Englanders.

Toman is a chef cooking at the top of his game. The first showstopper is a small bowl transitioning from the root store staple of winter to the push and growth of soft green spring. It’s celeriac and lovage, the root part creamed and smoother than a salesman’s patter, the leafy lovage freshly green and dinging with mineral tones. There’s a glass crisp shard of chicken skin, and a frond of black truffle, all of it taste and temperature exquisite.

I break a rule and take a photograph of the next plate, a windblown petal-fall of disks of white turnip smothering the last of the wild Wicklow venison, a splodge of black garlic purée to one side like a thick vehement full stop to winter.

Next we’re at sea with chalk-white halibut, topped with crisp sea lettuce, the sweetest scallop I’ve ever tasted and a foam that’s as right as any foam you’ll encounter.

The biggest of the plates is Fergus Henderson meets Alain Passard: juicy rounds of Chateaubriand topped with a leaf of wild garlic which has had its damp wilt dried to sugar crispness. There are smoked carrots topped with bone marrow, which could happily stand as a plate on their own account, nothing else necessary, nose to tail to leaf tip to root.

Three cheeses at the top of their game come at perfect temperatures, a Boyne Valley Blue, my first taste of Cashel’s delicious pecorino-style cheese (but much creamier) Shepherd’s Store, and Ballylisk – a triple cream cheese from Armagh that someone south of the border needs to start stocking soon, tariffs or no. These babies come with house-made sourdough crackers that could start a food trend all of their own, along with the fermented grapes that have the fizz of sherbert lemons.

I’m still thinking about the almond base on the dessert, a flattened disc of finely milled nuts with the texture of the pastry that gets soaked in juice at the bottom of an apple tart. There’s a spear of electrically pink rhubarb on top and a tube of white chocolate mousse to smooth out all the sweet tartness.

All of this: pace, excitement, food drama with twists that feel right, and the all- round audience enjoyment make Ox live up to all the hype I’ve been giving it at home. For years I’ve been telling my husband he would love it. “See?” I say, but he’s too busy masterminding a weekend with friends based around a dinner here. Ox started out knowing precisely what it was doing and has grown into something so good that if Michelin doesn’t give it a second star soon it needs its head examined.

What will happen to house prices after lockdown?
7