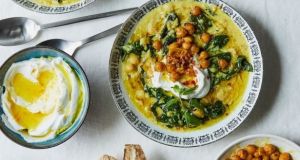 It was the most read, and we surmise the most cooked, recipe of 2020 at Irish Times Food, but not everyone is on board with Alison Roman’s chickpea stew, or spiced chickpea stew with coconut and turmeric, to give it its proper title. The internet sensation, which first appeared in the New York Times, has proved to be devisive, but that didn’t stop us making it, in our droves.

Is it a stew, or is it a soup? That was the question many of us posed when we chopped, fried and simmered our way through the recipe. With two cans of full-fat coconut milk going in, it definitely came out more of a (don’t count the calories) soup when I made it. But a lot depends on the greens you add to the fragrant broth; spinach and chard wilt down to a less substantial mass than say kale, or the collard greens Roman calls for.

In any case, we needed something to use up all those chickpeas stockpiled at the start of the pandemic and for many of us, this hit the spot. Judging by how often it still pops up among the most-read food articles at irishtimes.com, it still delivers.

Baking recipes performed extremely well during 2020, and we are not talking about sourdough and banana bread. Pastry chef Aoife Noonan joined the Irish Times Food team in 2020, and made her mark from the get-go. Readers loved her lemon cheesecake bars so much that it became our second most read recipe of the year. With their ginger biscuit base, creamy lemon filling and lemon curd drizze, these brought a ray of sunshine to dreary October days.

Noonan is also responsible for our third most popular recipe of 2020. Her apple, Cheddar and thyme scones promised a light and pillowy interior as well as an unusual savoury twist on a teatime classic, and the accompanying Harry Weir photograph of one split open and slathered with butter had us running to the kitchen to whip up a batch.

Noonan’s predecessor in the BAKE kitchen, Vanessa Greenwood, also inspired us to get the mixing bowl out. Readers loved her blueberry oat slices, a simple but very tasty snack, and her coffee traybake, an easy all-in-one sponge mixture topped with coffee buttercream.

But it wasn’t all sugar and spice this past, difficult year. We needed solid nourishment, and maybe comfort too, to get us through the tough days. Paul Flynn kept us fed, and interested in what we were making, without being too challenging.

His most read recipe of the year featured something he is very fond of, chorizo, and it’s an appreciation shared by many of us. Baked pasta with chorizo and Parmesan appeared in a column about his family’s favourite dishes, and we can see why. The recipe cleverly blends plum tomatoes with cream, garlic and a chicken stock cube for an instant sauce the pasta is baked in.

Flynn’s second most read recipe of the year saw him off on his culinary travels, to Thailand. His Thai pork meatballs were part of a January 2020 comfort food column that also included lamb shoulder ragu with gnocchi, and Spanish chickpeas with black pudding, the recipes for both of which you’ll also find in the link as they are perfect for this time of year.

Confirming that there’s little we like more than a one-tray oven baked dinner, Flynn’s third most popular recipe of the year was for pork chops with roasted pears, sage, onion and gorgonzola.

Lilly Higgins kept family dinners interesting, and simple, from her kitchen in Cobh where her own young family are her inspiration, and her critics. Her three most popular recipes of 2020 are topped by her smoked haddock gratin, which she describes as “fish pie without the faff”. Sold.

We also enjoyed making her home made pizza, which had lots of vegetables blended into (and hidden in) the tomato sauce. More recently, Higgins also shared a recipe for a Chicago-style pizza, if you prefer a thicker base. Vegetables are also at the heart of her third most read recipe, for Mediterranean vegetable lasagne which has an interesting cheese layer with egg, ricotta, mozzarella and Parmesan instead of bechamel.

Many of us may have seen more of our kitchens than usual this past year. We were delighted to team up with Euro-Toques Ireland and some of its member chefs at the start of the spring lockdown, to bring you a recipe each weekday. Eventually we had a collection of 100 recipes for easy, midweek dishes that chefs cook at home. You can access them all here.

Thank you for reading and cooking along with us in 2020. We hope we have kept you inspired and interested.