New food options to take off at Dublin and Cork airports

Martin Shanahan recipes on the menu at Cork airport, while pop-ups may be just the ticket in Dublin 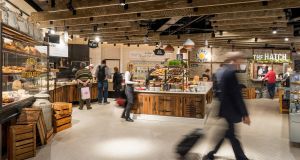 Marqette in Dublin Airport Terminal 1 serves up to 5,000 passengers and staff every day 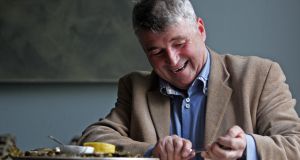 Chef and restaurateur Martin Shanahan has been named “food ambassador” at Cork Airport and will be creating signature dishes for Aramark’s two outlets there. Photograph: Eric Luke

The food offering at Irish airports is to benefit from significant investment in new facilities and concessions, and from a proposal to give access to smaller scale artisan producers, and speciality cafes, to run pop-ups or market stalls.

At Cork airport, an ongoing €4 million investment programme includes a new bistro and bar due to open next month, and a food court that will open in May. Martin Shanahan of Fishy Fishy restaurant in Kinsale, Co Cork has been signed as “ambassador for Aramark Cork Airport food outlets” and will provide recipes for signature dishes to be served there.

At Dublin Airport, Irish food brands and producers are being invited to explore the possibility of opening pop-ups or permanent shops, cafes and market stalls, with the aim of broadening the food service choices available to passengers and staff.

“We are constantly striving to improve our food and beverage offering for both passengers and airport employees. We aim to showcase the best of Irish food in our restaurants and cafes at Dublin Airport, with a strong emphasis on locally sourced produce in particular,” said John Bolger, Head of Concessions.

Dublin Food Chain, a marketing and networking initiative, is running a seminar on “Doing Business with Dublin Airport” at which Mr Bolger will be the keynote speaker.

The seminar sold out initially, leading to an additional 50 places being made available. It will take place at the Clayton Hotel, Dublin Airport at 5.30pm on March 6th, and admission is €10. Registration must be done in advance at dublinfoodchain.ie.

“We are expecting at least 170 people,” said James Burke, network manager for Dublin Food Chain, which is run by four Local Enterprise Offices in Dublin, in partnership with Bord Bia.

According to Mr Burke, interest has come from small scale cafe operators as well as bigger concerns, and from food producers interested in doing occasional pop-ups.

The seminar will also hear from Michael Thornton, general manager of Marqette, the restaurant in Terminal 1 which was named airport hospitality provider of the year at the Irish Aviation Industry awards 2016, who will give insight on the topic: “Setting up a new operation at the airport”.

At Cork Airport, the new food and beverage offering will also include the landside Kinsale Café and Bar. This outlet and the food court will be operated by Aramark. Craft Lane, a bistro bar operated by KSG Group, replaces The Last Call , and will open next month. AMT Coffee is currently trading from a temporary outlet in the departures hall while a permanent shopfit is being completed.

“We have been working closely with the team at Cork Airport and local food producers to develop a menu that showcases what makes Cork the gourmet capital of Ireland, ” said Frank Gleeson, managing director of Aramark Northern Europe.

Working from home could save you 8 weeks and €3k a year, and halve your transport footprint
10