What is in those seasonal edible snowballs 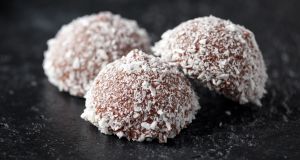 Snowballs: melt in your mouth delights or trans fats to make you shudder?

White Christmas or not, there will be plenty of snowballs about this winter. Confectionery makers have made sure of that with their squishy-centred chocolate- and coconut-covered sweets.

Take a look at the wrapping on these sugary confections and it’s a little like summoning up the ghost of Christmas past, however. Not the distant past of Dickens’s time when the gooey white mallow centre still contained some of the plant that bears its name, but a more recent past. In that world, hydrogenated vegetable oil was in common use, lists of ingredients did not have to be legible and best-before dates were difficult to find.

Take Caffreys snowballs, which sometimes come in plastic buckets. These have been made since 1948 by the Irish company, which says it still uses the original recipe, handed down through three generations. That is not impossible, but it is surprising, given the list of ingredients.

One of these is hydrogenated vegetable oil from palm kernels. Although such oils, which are also called trans fats, have been around for about 100 years, it’s a struggle to find them in products on supermarket shelves. That’s because they are associated with higher risks of heart disease and other issues. A briefing note for the European Parliament from 2016 says, “There is now broad scientific consensus that high consumption of trans fats significantly increases the risk of coronary heart disease, and may also be associated with increased risk of other cardiovascular diseases, obesity and type 2 diabetes.” It’s more than 10 years since Marks & Spencer, and other retailers, said they would not use this ingredient in own-brand products, given the risks. So it’s surprising to see it here. That said, a few snowballs probably won’t hurt anyone now that this fat is not in lots of margarines, sweets or biscuits. Quantity matters.

The other ingredients include sugars, syrups, milk powders, desiccated coconut, reconstituted egg white and cocoa powder, as you might expect. There is also lecithin, which the founder Thomas Caffrey believed was good for one’s health. He had a point and it is still sold as granules in health food shops. Here, however, it is identified only as E322. The next ingredient – propylene glycol alginate – sounds unpalatable, so it’s unsurprising that this stabiliser is identified as E405. The snowballs are rounded out with soya, rice flour, flavouring and gelatin.

That’s the list on the purple bucket, but anyone buying Caffreys snowballs in the white bucket will struggle to read the list of ingredients. That’s because it’s printed in what looks like white type on a white background. Happily, the allergens still show up as they are in yellow. This is in breach of the legislation, according to the Food Safety Authority of Ireland. Ingredients need to be legible. There’s no best-before date to be found easily either, though given that sugar is a good preservative, that probably doesn’t matter so much.

Another Irish company, Rose Confectionery, makes a more enticing product at its plant in Offaly. The Snowcreams are sold at Aldi for Christmas under the Orchard brand. The list of ingredients starts badly, with glucose-fructose syrup, a form of sugar that has been blamed for rising obesity levels. Then it uses non-hydrogenated vegetable oil, which seems like a good choice, but unfortunately it is palm kernel oil, and there is no indication it is from a sustainable source. It gets better. After that there is sugar, coconut, water, whey powder, caster sugar, egg albumen, fat-reduced cocoa powder, soya lecithin, natural flavour and salt. So it’s no health food, but it’s a more straightforward sugary treat than others on the shelves.

Tunnock’s Snowdreams have a very similar list of ingredients. It’s almost identical, except that it includes egg albumen crystals rather than egg albumen, and wheat flour.

The packaging on this Scottish product declares: “These Snowdreams are prepared from the purest ingredients, to give you a most delightful product.”

That depends how you define “pure” and “delightful”. If these brands used sustainable palm oil, however, they could be seen as good, sugary, old-fashioned treats and a vision from Christmas future.

The ghost of Christmas yet to come, and the one we want to avoid, takes shape in the form of Snowballs from the American brand Hostess. There are about 50 ingredients, including the colouring E129, which it warns “may have an adverse effect on activity and attention in children”.

That’s a vision to make one shudder.

‘I had an abortion. Now my fiance says I am heartless and has broken it off’
5