When La Cucina Centro opened on Henry Street in Limerick City in November 2016, there were queues out the door for the first couple of weeks 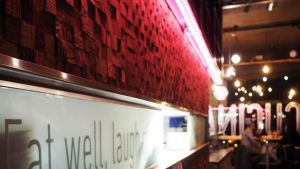 When La Cucina Centro opened on Henry Street in Limerick City in November 2016, there were queues out the door for the first couple of weeks. This casual Italian restaurant already had a fan base, thanks to the original La Cucina in Castletroy on the outskirts of Limerick city.

Lorraine Fanneran and her partner Bruno Coppola opened this casual Italian café and restaurant in 2003, but this cozy little spot had an Italian heritage passed down through generations. Coppola’s parents, Alfie and Anna, met while working in Domenico’s chipper in Limerick, after they had emigrated there from their homeland of Italy, from the north and south respectively. Together, the Coppolas opened La Piccola Italia restaurant in 1985. Their son, Bruno, met Lorraine in college. At the time, she thought gnocchi was “yucky” but that soon changed thanks to the Coppola’s influence.

La Cucina was a success from the start. An extra push came when the Irish food community began to fully embrace Twitter, in around 2009 and 2010. Lorraine was one of the key early adopters and used Twitter extremely effectively to promote their business.

When I make my annual stop in La Cucina on the way home from Other Voices in Dingle, this year I drive into the city centre to visit La Cucina Centro. Twitter may not feel like the same friendly place as it was back in 2010, but La Cucina’s new home is as welcoming as the original. They have heaps more space and a cool, contemporary look thanks to the work of local Limerick-based interior designer Tullio Orlandi (www.tullioorlandi.com) and sign writer Tom Collins (www.tomcollinssigns.ie).

We sit down to a plate of three types of arancini (€7), the deep-fried balls of risotto native to Sicily. There is a crispy coated ball stuffed with mushroom risotto, while a bright yellow saffron risotto has been put to vibrant use in another arancini. Our favourite is the bolognese version, where a rich tomato sauce has been put to use to create a moist and comforting arancini.

A hearty plate of boscaiola (€12), rigatoni doused with pancetta, peas, mushrooms and hunks of sausage meat, tied together by a creamy tomato sauce, soothes a tired traveller. A foccacia (€8) of smoked chicken, goat’s cheese, roast peppers, pesto and rocket is simple yet satisfying. For €2, I add soup, even though the day’s soup is broccoli, which we all know is the worst soup of them all. However, La Cucina Centro have managed to make even broccoli soup delicious, thanks to a generosity of spirit when it came to the addition of Parmesan cheese.

There are salted caramel brownies for dessert, though it’s hard to choose from the overflowing sweet treats counter which is made up of baked goods made in-house mixed with carefully selected local suppliers such as The Nutshed. There’s a good selection of wines and a neat collection of Italian and local craft beers, such as the Sardinian Ichnusa craft beer (€6) and the Treaty City Shannon River IPA (€6).

Meanwhile, the original La Cucina is still in full flow in Castletroy. Currently, Lorraine and Bruno pop in every morning to make sure their staff are happy with the plan for the day, before they head into La Cucina Centro to oversee operations at their new business, with Lorraine at front of house and Bruno in the kitchen. They’ve pulled together a whole new team for La Cucina Centro, including our awesome waitress who serves up some welcome Limerick wit alongside the Italian fare.

La Cucina Centro is a bright spark on Henry Street that locals were ready and waiting for. Highly recommend for your next trip to the Treaty City.