The Irish chef and Masterchef judge has four London restaurants. His kitchens are calm, inclusive places, but his own start as a chef could not have been more different... 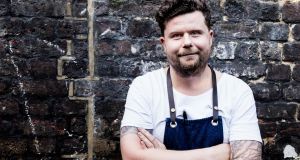 Robin Gill, from Glasthule, who has four restaurants in London. Photograph: Jonathan Thompson 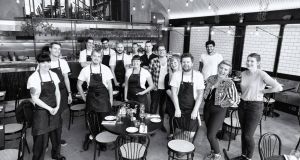 Robin Gill with the team at Paradise Garage in London. Photograph: Jonathan Thompson

First impressions, unfortunately, are usually lasting. Fresh from my failed attempts at repeating an appalling Leaving Cert, I decided I would become a chef. I chose to dive right in at the deep end and landed a job at a highly regarded and extremely busy brasserie.

I had no regrets in passing up the chance to go to college as I felt I had some catching up to do and had wasted enough time and parents’ money over the years – this was my chance to show everyone I could do something and I would stick with it no matter what; hopefully with some success.

I have now been cooking professionally for 18 years, in some of the best and toughest kitchens in Europe, and I can honestly say my early experience was the most unnecessarily brutal and has scarred me for life.

Keen as mustard and with a brand new set of knives, I set foot into the kitchen full of energy and excitement. The hustle and bustle of cooks from different lands running around frantically trying to get ready for the lunch service instantly drew me to this new world – this was the place for me. To say I was fresh is an understatement.

Within my first few weeks, I had several cuts and burns, and as my body adjusted to the 18-hour days I would literally fall into bed fully clothed only to wake up panicking and dreaming about the job. I loved how much I was learning and tried to write down everything, as the weeks and months flew by. I would make mistakes along the way, as you would expect. But what I did not expect was the behaviour in the kitchen.

There was a senior team of about five guys, from head chef down to CDP [chef de partie] – they were the pirates running the ship and seemed quite close. It started with silly pranks such as asking me to run to the basement walk-in to count produce, and on my return sneering and making degrading remarks.

Then there was the aggression, where I had hot soup thrown at me, then forced to clean the mess. For no apparent reason, they all seemed to suddenly dislike me. When I asked a question, I was either threatened and/or screamed at. The quiet evenings were the worst as they had more time to be cruel.

Once, they were all standing around a bucket of garlic, peeling it down. I walked up to try to take part and reached in to grab some garlic. They all suddenly stopped chatting, began to glare at me and the horrific intimidating silence was broken by one of the group calling me a “f***ing queer”. I walked away while they were all laughing, and struggled to hold the tears back. This continued for months, and I dealt with it by retelling the stories to my pals and turning it into humour.

We were permanently understaffed, as many of the new cooks would not last the day. So, I began to move up the ranks, to improve and manage my own section.

‘It is a Friday lunchtime with 250 covers on the book and there is a backlog of checks that we cannot keep up with. One of the cooks screams at me and throws me four duck breasts and asks me to get them on cooking. I am nervous as I do not know how, so I throw a couple of pans on full blast and add two huge ladles of oil. The oil instantly starts to smoke.

I suddenly recall having seen the duck breast going into a warm pan with no oil, skin-side down, and go back to question the chef. He screams at me to “just cook the f***ing thing” so I panic and throw one breast in first, a flame spurts up and I throw in the second one. The oil splashes up to my neck, chin and face and hot oil covers one-third of my face. I’m rushed to hospital.

I’m out of the kitchen for two weeks and paid for one. The doctor tells me I should take two months. Upon my return to the kitchen, the men are standing around my section reading my recipe book and making jokes. I grab my book back and one of them barks: “Have you got the recipe for the duck?” To which they all crack up laughing.

In the evening, one of the waitresses asks me about my burn and a chef shouts: “Get the f**k away from him, he has Aids, just look at his f***ing face.” Embarrassed, I go back to my station.’

I wanted to prove that I could cope and do my job . . . before I left. That day came when I was finishing a week where I had successfully smashed every service, running a two-man section solo. I had cleared a section to set up an area where I could lay plates to prepare for the slamming we were expecting.

A chef grabbed me and asked me: “What the f**k are you doing, you retard, f**k off over there and strain the stocks.” That was it! I had had enough. I had worked incredibly hard and was mirroring what a senior guy had done the week before that helped us get the food out in time. I threw down my apron and told him to strain it himself. I walked down to change and gather my things, and completely broke down.

As I write this, I am fighting back the tears. There is no reason for this kind of behaviour – it didn’t make me a better cook. They couldn’t staff the kitchen and the team all broke apart a few months after, with the head chef walking out.

Thankfully, this is not commonplace, but is does happen. If you asked me to name them, I honesty couldn’t. It’s as though I’ve blocked them out.

My career improved from then on. I worked in better kitchens and worked harder and harder and travelled the world. They did not stop me from sticking with it.

I have set up my own restaurants where there is the most incredible warm and loving atmosphere. The businesses are run with passion and hard work – without fear. There is no bullying and there never will be. Everyone is as important as the next and everyone has a say. Ideas and creativity are embraced. The people I am blessed to work with are not my “staff”, they are my family and they know that.

This article appears in a special Food Month glossy winter food and drink guide. Free with The Irish Times on Friday, November 4th