Is the buzz about Chinese eatery Hang Dai justifed? Yes. 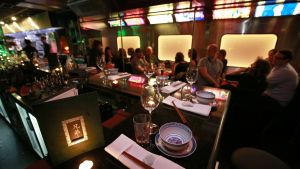 Take one gutted duck. Put the bird to your lips and blow to inflate it like a balloon. Blanch the bird to tighten the skin. Blanch it again. Then chill your duck. The next day roast it in a wood-fired oven until the skin turns into a lacquered piece of glass. The skin’s the prize. You might even throw the rest of the bird away.

That’s how Andrew Wong, the London-born Chinese chef explained traditional Peking duck at last year’s Food on the Edge in Galway. “Everybody has this preconception that Chinese food is quick, cheap and goes well with company after seven pints of Guinness,” he said. But what the West thinks of as Chinese food is typically Cantonese food. We are eating the tip of the iceberg of a vast food culture, Wong explained. China has 14 international borders, a third of its 1.6 billion population are Muslim (so no sweet and sour pork) and in large areas of China noodles, not rice, are the staple carbohydrate.

Chinese food is the ugly duckling to the swan that is Japanese cooking. One friend told Wong: “Japanese cooking is about getting the best produce and doing the least to it. Chinese cuisine is about getting the worst produce and doing the most to it and making it delicious.” Ouch. But based on what we get in takeaway cartons here, it has a cruel ring of truth.

In Hang Dai on Dublin’s Camden Street they use a machine rather than a blast from their own lungs to inflate their Skeaghanore ducks, before they’re glazed and chilled for roasting in an applewood-fired oven. You tick a box on your online booking to order the duck. It’s €40 for a half bird. But if you don’t want to commit that far in advance there are some crispy duck dumplings on the snack menu.

It’s a small bump in an otherwise happy road, although there’s another jolt elsewhere. We’ve ordered duck for two, but they’re happy to split it three ways. So first up are small glasses of a duck tea, a warmly satisfying broth with minced ginger silted in the bottom of the glass. Then the leg comes chopped on the bone with plenty of that glass-crisp skin. Think Botox-tight forehead glazed in jammy soy.

Around our duck three ways we’ve done a rummage through the other dishes, mostly the smaller plates. So there are prawn toasts, triangles of good sourdough layered with prawns, cut into soft triangles and served with a yuzu mayonnaise, which awakens a long-lost food memory of Superquinn mandarin yoghurts, in a good way.

The other chili attack is hidden on a small plate (the steepest dish at €12 on an otherwise reasonable menu) of raw scallop slices dotted with edamame beans. Without the chilli it’s a balanced delicate plate. There’s a bowl of lip-blackening squid ink noodles that turns us into coal-eating goths. The waitress needs to use the blue roll to clean the ink stains from our shiny red table. “Sorry,” we say. “That’s normal,” she replies.

There’s more manageable blackness on one of my favourite small plates, the lacquered aubergine with a miso black garlic glaze and topped with feathery bonito flakes. It’s got the pleasure of a family-style feast, each person reaching with chopsticks to nab a taste of something else. Except the food is several notches better. The flavour bursts keep coming rather than the diminishing pleasure that comes from stodgy takeaway.

The other box I ticked was the birthday one and my friend’s “cake” comes, in the spirit of a time-pressed parent, as an unwrapped Iceberger with three candles stuck in it and three After Eights on the plate beside it.

Hang Dai is a welcome change from the bog-standard Chinese restaurant. They’ve kept the fun of a friendly feast and made it different and more delicious. It’s not quite a full reprieve for an amazing 4,500-year-old food culture, but it’s a good start.

Facilities: Stylish, but so dimly lit any make-up touch-ups could end in disaster

THE VERDICT: 8/10. Style and a lot of substance in this great new Chinese

Brianna Parkins: Being Australian means knowing the land you love could kill you
2

Auctions and fairs: a guide to this week’s events
6

‘When you’re beautiful, other women absolutely despise you’
8

Why did no one tell me IVF can lead to problems breastfeeding?
9