Best chef honours claimed by Dubliner as more than 90,000 public votes are cast 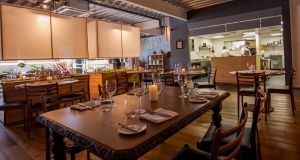 Loam in Galway, winner of the restaurant of the year at the RAI awards

Loam, a Michelin-starred dining room and wine bar  in Galway city, is Ireland’s restaurant of the year 2019. The restaurant, which opened in 2014, only uses ingredients from the west of Ireland, and has a strong sustainability ethos. It is owned and run by Enda McEvoy, who was voted best chef in Ireland at these awards in 2016.

The best chef 2019 is Graham Neville of Dax Restaurant on Pembroke Street Upper, Dublin. Neville, a former Commissioner General of Euro-Toques Ireland, was previously head chef at Restaurant FortyOne in the former Residence private members club on St Stephen’s Green. He has worked in Chicago, London and Lyon and also spend seven years at Thornton’s in Dublin. Dax, which is owned by Olivier Meisonnave, was also named best restaurant in Dublin.

Pub of the year is Doheny and Nesbitt, Baggot Street, with The Old Spot, Bath Avenue, Dublin, taking the gastro pub honours. The best newcomer national winner is Everett’s Restaurant in Waterford, where the head chef and co-owner is Peter Everett, who was Graham Neville’s sous chef at Restaurant FortyOne.

Sean Hussey, of Hussey & Sons Fruit and Veg, took the Local Food Hero award, sponsored by Rewarding Times. Hussey, a third generation grower and distributor, recently opened up his farm in north Co Dublin to people interested in growing their own crops, and also manages micro-distribution for a number of small-scale specialist growers.

More than 90,000 nominations were made by members of the public in the regional rounds of these awards, which got under way in January and are administered by the Restaurants Association of Ireland.

The awards were presented at a gala dinner at the Clayton Hotel, Burlington Road in Dublin on Monday evening, attended by more than 1,100 guests.

NATIONAL AND ALL IRELAND WINNERS

Pub of the Year