Indian food that’s better than the takeaway? Here’s how to do it at home 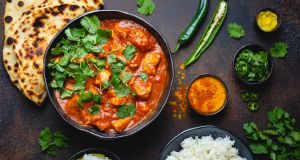 This week’s Fakeaway is a much-loved Indian dish that isn’t really Indian at all. Chicken tikka masala is widely believed to have originated in the UK, where it is the most popular of Indian takeaway orders, and it has an enthusiastic following in this country too.

Karan Mittal, who was headhunted by Dublin restaurateur Asheesh Dewan to be head chef at Ananda in Dundrum in 2017, is originally from Delhi, and previously worked in restaurants there, and in the US. “Not many people know that chicken tikka masala is a UK-born dish,” he says of the fusion creation that shares some characteristics with butter chicken, but is less spicy and more sweet.

“In India, you’ll have butter chicken, kadhai chicken, and many other dishes that are made from chicken tikka. Actually butter chicken was invented by chef named Kundan lal Jaggi [of the Moti Mahal restaurant in Delhi], who used to make tandoori chicken. One day, he got some guests who were hungry and he didn’t have enough chicken. So he cut the tandoori chicken into pieces and served them with a basic tomato gravy and butter. And that’s how butter chicken came about.”

Aashim Bajaj, owner of Cinnamon Garden Indian restaurant in Ashbourne, Co Meath, agrees. “Chicken tikka masala does exist in India, but with a completely different recipe - with onion, tomatoes, ginger, garlic and coriander and hand pounded spices - unlike the tomato creamy version we serve in Ireland.

“When we opened Cinnamon Garden in 2009 we started with that recipe but Ashbourne demanded smooth creamy chicken tikka masala, so we had to change our recipe.”

Adaptations are made to recipes in India too, Karan Mittal says. “The thing is that there are lots of regional variations in Indian cooking. The same butter chicken is made differently in Delhi and Punjab. Same as my home, a simple dish like cumin potatoes is made differently by my mum and grandmum. So there’s nothing right or wrong as such, but just different variations of a dish.”

Despite their differences, the starting point for both chicken tikka masala and butter chicken is chicken tikka, the yoghurt marinated chicken chunks traditionally cooked in a tandoor oven. “The chicken tikka can be enjoyed as a snack with mint chutney and can also be used to make dishes like butter chicken, kadhai chicken, lababdar and so on,” Mittal says.

“I cook very simple dishes at home, using minimal ingredients. They are mostly the home recipes that my mum makes in India. Being a lazy cook at home, I enjoy the simplicity of her recipes, but the ingredients come together into great-tasting, family-style dishes,” he says

Here is his home-style chicken tikka recipe. “It is very easy to make at home. It just involves a bit time and marinating, and it’s delicious. It’s the sort of thing that would be part of a family meal my mum and grandma might make at home on a Sunday, when the entire family is together.”

Method
1. Clean the chicken thighs and remove any extra fat. Cut the thighs into small pieces and dust with the chaat masala, if using.

2. Make the first marinade by mixing all of the listed ingredients in a bowl. Add the chicken thighs and coat well.

3. Leave to marinate for at least an hour.

4. Remove the chicken pieces and allow the excess juices to drain.

5. Next mix the chicken pieces with the ingredients for the second marinade and refrigerate for at least two to three hours, overnight preferably.

7. When ready to cook, skewer the chicken and cook it in a very hot oven for about 20 minutes. Baste the chicken with melted butter and return to the oven to cook for a further five minutes, or until tender.

8. When the chicken is cooked, remove from the oven and brush with some melted butter and chaat masala before serving with mint chutney.

Variation: You can use the same marinade to make tikka broccoli, peppers, cauliflower and onion.