I sent the first of my four pigs to the abattoir. Now I feel a pang of guilt

As well as being ‘little land managers’, pigs raised among the trees taste better 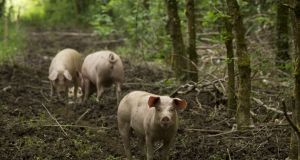 Quite how common pigs and wild boar once were in the Irish landscape can now only be gauged from placenames such as Kanturk (boar’s headland) and Muckross (wood or peninsula of pigs). Nowadays, pigs are rarely seen outside the industrial sheds where they are fattened on cereal by-products, laced with antibiotics and soya beans. It makes the latest initiative among farm-foresters to reintroduce traditional breeds back into young broadleaf forests all the more welcome.

The past few decades have seen a phenomenal increase in Irish forestry, rising from 1 per cent in 1905 to 10 per cent now. Our temperate climate means that tiny oak, beech or ash saplings become a dense forest within 15 years, offering ideal terrain for grazing pigs and providing foresters with an extra income from woodland-reared pork as their trees mature.

Unfortunately, the Department of Agriculture is not so keen. Grazing livestock on grant-aided woodland is forbidden because of the potential damage that sheep and cattle, in particular, can do. As a result, when I looked into buying pigs for my own six acres of young oak trees last year, the only forester who would admit to keeping pigs was Justin Good, a professional forester and RDS Forestry Award winner with 60 acres of ash, oak, beech and maple wood in Belturbet, Co Cavan. The RDS forestry website shows him relaxing with some hairy Kunekune pigs – a New Zealand breed that was approaching extinction in the 1980s.

“I keep a few as a hobby more than anything,” says Good, whose pigs have been admired by government forestry inspectors despite their unauthorised status. “I feed them a bit of barley in the morning and they graze for the rest of the day. They are my little land managers. Pigs have always been a natural part of woodland and I’d like to see more of it in Ireland. Chefs are crying out for quality free-range meat, and my pigs are totally organic.”

His example encouraged me to buy seven Tamworth pigs last August, and I’ve been apprenticing as a swineherd ever since, discovering the ancient custom of pannage (fattening pigs on acorns, beechnuts and hazelnuts) and the proper compensation for when a pig ploughs up a neighbour’s field: Brehon Law advised sending in two yoked horses, and if no earth sticks to their teeth as they graze, the field is fully recovered.

My pigs are now 11 months old. Seeing these ginger-haired, long-snouted ruffians rustling through the wood lifts my heart – or at least it did, until I sent the first four of them to the abattoir a fortnight ago. Now I feel a pang of guilt when I see their remaining siblings. Tamworths are descended from the traditional Irish pig, known as the Irish Grazer or Greyhound, which in turn is a descendent of the wild boar. They reanimate the land, adding a touch of wildness. So far they haven’t damaged so much as a leaf or branch of my trees.

Across the border from me, in Co Meath, Ety Schuurmans acquired her Tamworths after retiring from a career as a public health doctor in Ireland, the Netherlands, Malawi and Burkina Faso in 2013. Her intention was to produce ethically farmed, woodland-reared pigs that were free to rummage and live relatively long lives: three or four times longer than the three-month lifespan of a commercial pig. She keeps the animals in natural family groups, feeding them organic grains from England to supplement their woodland foraging and to ensure they don’t stray.

“Tamworths make good mothers,” she says. “They need no help with birthing, apart from making sure the litter is kept warm and the sow is comfortable and has water and feed nearby. I allow the piglets suckle until they naturally wean at around three or four months – twice as long as even under organic standards.” She cares for them right up to the end, feeding them apples and treats as they proceed through the abattoir, then sells the meat at premium prices every Saturday at The Green Door Market in Dublin 8.

The level of interest in rearing outdoor pigs led Margaret O’Farrell and Alfie McCaffrey at Old Farm in Tipperary to begin offering courses in fencing, farrowing, feeding and housing. These get booked out fast, although a fair proportion of the newbie swineherds grow disillusioned after struggling to keep these innately curious animals from escaping. Good-quality fencing or three strands of well-maintained electric wire are vital.

For O’Farrell the move towards pig farming was sparked by a mission to bring back the taste of traditional pork and bacon. “There is this idea that we need to produce cheap meat to feed the world, but it’s not true. We only spend 12 per cent of our disposable income on food, while back in 1916 we were spending 50 per cent. The real issue is to stop food waste. Irish homes waste 300,000 tons of food annually.”

Her rare-breed pigs are sired by a giant 2m-long boar, weighing almost half a ton, which has been purposefully bred for good temperament, length of back (loin), shoulder and hams. “I can honestly say I don’t love our pigs,” she says. “However, I do care about them – about their health, their life, their diet and even their death. They lead happy lives, though abattoirs can still be harrowing. I’ve seen pigs beaten off lorries, some with tumours and broken legs. That cannot be allowed.”

Slane Castle has now also begun rearing pigs. For Carina Mount Charles, daughter-in-law of Lord Henry, the introduction of Tamworth pigs was an integral part of establishing a permaculture organic farm on the estate, called Rock Farm Slane. “We use the animals to rotavate and fertilise the soil. They keep the brash down in the woodland and we’ve managed to gain back a bit of pasture alongside an old conifer plantation in the river meadow. When we had only a few pigs they lived full time in the woods, but now that we’ve a larger herd we move them between pasture and woodland. They are currently grazing the wooded slopes below our climbing tree [a new activity venture], clearing some underutilised pasture.”

The real value is in producing a commercial product from one’s pork to ensure a longer shelf life and wider customer range. Eoin Bird and his mother, Miriam Cremin, got into making charcuterie using the pigs they were rearing on their young ash and oak wood in Tara, Co Meath. The animals are fed on barley grown on the farm, ensuring full traceability.

“We farm rare breeds because they are more suited to the outdoors and grow slower,” says Bird, “allowing the pork develop a deeper flavour, which lends itself perfectly to charcuterie.”

Their salamis and chorizos are sold under the brand The Wooded Pig and are entirely made on the farm. “The Irish climate really isn’t suitable for air-drying meat and so we’ve installed an Italian production unit with a dryer, ager and fermenter to ensure we can produce charcuterie at the level of the Italians and Spanish, but with the flavour of Irish woodlands.”

If this all sounds somewhat idyllic, it is worth reiterating that a pig’s ability to hatch convoluted escape plans should not be underestimated. They are intelligent animals that will open gates and build escape routes if they grow hungry or bored. No doubt they could potentially damage young saplings, although my own pigs happily graze around expensive, rare young trees without doing any damage, but once a wood has reached 12 years there is no real harm a pig can inflict – instead they offer enormous benefits by clearing undergrowth, fertilising soil and encouraging natural regeneration (as long as there are not too many pigs on the land).

Furthermore, allowing farmers to rear pigs in woodland might encourage more of them to grow broadleaf trees and help counteract the recent stark decline in new hardwood plantations as farmers worry about locking-up their land for centuries under slow-growing trees. The Irish government is beginning to realise that relying on antibiotics to rear pigs in intensive factory conditions is harming our image abroad.

In Britain, the influence of Hugh Fearnley Whittingstall and the Farms Not Factories movement is causing the public to demand ethical pork, with celebrities such as Jeremy Irons, Jon Snow, Dominic West and Vivienne Westwood all vocal in their protestations. Ireland now has 1.7 million acres of forestry, which in theory could take up to 10 million pigs, rather than the 1.3 million that are currently crammed up inside industrial pens in computer controlled factories. The choice is entirely ours.