How do you like them apples? The growth of an Irish industry

Some 95 per cent of the apples we eat here are imported, yet a few tenacious farmers are showing we could supply the market ourselves 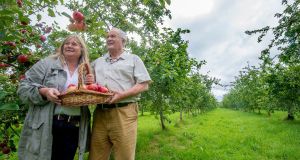 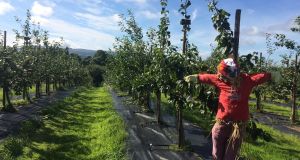 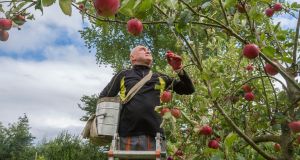 Our supermarkets are laden with apples from South Africa, New Zealand and France because we cannot produce good apples in Ireland. This is the general assumption, that our country is only suitable for growing crab and cooking apples, or at best a few mealy, brown-stained eaters that turn to mush within days.

To disprove this fallacy drop into the farm shop at Con Traas’ apple farm between Cahir and Clonmel where you are surrounded by 40 acres of the finest, blemish-free apples and plums hanging heavily off every tree. Since the early 1970s, Con and his father before him have been growing and selling more than 15 different varieties of apples to the people of Tipperary. The orchard produces 3 million apples a year and 60 different varieties, most of which are sold from the farm door.

“There should be farms like ours near every town that has a population large enough to support it,” says Traas. “We’re doing this near Clonmel; there should be someone else with a similar set-up near Kilkenny, someone else near Limerick and Waterford, all growing apples, plums and other fruit for regular customers that come to buy locally, rather than from the supermarket. I’m delighted that Gilbert’s Orchard in Carlow have now opened a farm shop with this in mind.”

The Irish spend €100 million annually on apples, 95 per cent of which are imported, yet from the early Discovery and Katy varieties of late August, we can produce apples up until late November when the Jonagolds and Elstars ripen. These late season slow-growers are ideal for cold-storage and keep well until the following June. At most there is a six-week period from early July to mid-August that Ireland needs to import apples. So why are we growing so few?

“It’s simply a lack of expertise,” says Traas. “If I wanted to plant 50 acres of orchards today, it would be hard to find someone in Ireland with the expertise to manage it. I’d have to hire a manger from Holland or Italy or the United States. Previously there would have been experts in Teagasc who would have gone out to new orchards every month or two and given advice, but Teagasc no longer has the resources.”

An agricultural science degree is the most viable path to learning in Ireland, says Traas: “But if a farmer wants to grow a few trees, he doesn’t want to go off to college for four years first. Yet it’s vital as a basis, before getting any practical training.”

One of the few people to have successfully set up a profitable orchard in recent years without inherited land is David Llewellyn, who studied at Warrenstown Horticulture College and UCD, before serving an apprenticeship in Germany. In 1999, he established an orchard on rented land in north Co Dublin, before buying a field near Lusk in 2002 where he set up an orchard and a small vineyard, with a perry pear orchard added later. He makes the business viable by selling at markets in Temple Bar, Dún Laoghaire and Glasnevin.

Traas and Llewellyn have diversified into making apple juice, cider and apple vinegar to use up excess and blemished fruit. Highbank Organic Orchard in Kilkenny has done likewise, where Rod Calder-Potts and his wife, Julie, developed Orchard Syrup, made from organic apples.

Recently, they expanded into distilling cider to produce vodka, brandy and a single-estate gin. The Calder-Potts planted their orchard in 1969 on land acquired by Rod’s great-grandfather in the 19th century. They earned a viable income until Ireland joined the Common Market in 1974 and cheap imports flooded the market. “1979 was the last year we made a profit out of selling apples. In 1982, along with most apple farmers in Ireland, we grubbed our desert apple orchards.”

In 1994, Calder-Potts converted to organic farming and replanted. Highbank has now got 8,000 apple trees, grown bio-dynamically without the use of any chemicals and set among small lakes, woodland and various wildlife habitats to encourage as diverse an ecosystem as possible. Their apples are sold by Dennis Healy at various farmers’ markets.

Apple growing is on the rise throughout Ireland, with cider and apple juice producers in particular expanding their operations. The National Apple Orchard Census of 2012 recorded a 6 per cent increase since 2007 to 46 growers, with 1,500 acres of orchard in the Republic. This sounds impressive until one learns Northern Ireland has 3,500 acres of mostly Bramley apple orchards – the majority of which get exported to Britain or are brewed into cider. Since the 2012 census, Ireland’s orchards have increased significantly, with the Donegal juice manufacturer Mulrines currently planting 288 acres of dessert apples along the N7 motorway near Kill in Co Kildare.

“We can’t grow oranges or mangoes here,” says Peter Mulrine, the managing director, “so, it makes sense to grow apples and save importing juice from the UK.” His company supplies much of the private label fruit juice consumed in Ireland and so they’ve a constant demand for good quality fruit. “Our investment will have started to pay off in three years, which is vital as one of the problems for most growers is that it is a 20- to 25-year investment. If the orchard doesn’t work you have a long time looking at it, and if the market changes you’re stuck.”

Mulrines planted 80,000 trees and by the end of next year hope to have 140,000 planted. “We used guys with experience from Herefordshire, and Dutch subcontractors to design and lay out the orchard. The idea is to manage it mechanically using the latest technology.”

Alongside large-scale producers, small back-yard orchards are also on the rise, with regular training courses provided by the likes of the Irish Seed Savers Association, which has built up more than 160 traditional native varieties of apples at their centre in Scarriff, Co Clare. There are longer FETAC-accredited horticulture courses at the Organic Centre in Leitrim, Kinsale College and Teagasc’s colleges in Kildalton and the National Botanic Gardens.

“These courses are ideal,” says Traas, “if you are not seeking to grow commercially and don’t need to maximise your yield or ensure absolutely no pest damage. You’ll get a good crop in a year that suits apples, though in other years you mightn’t get so much. It takes careful management to ensure a good crop every year, with annual pruning and removing buds and excess fruit in good years.”

While all this sounds encouraging, the reality, as anyone with apple trees knows, is infestations of canker, aphids, worms and blight. How do the commercial producers manage to stave off disaster?

Calder-Potts produces blemish-free apples without using any fungicides, herbicides or chemical fertilisers, but conventional apple farmers are also tending to use less chemicals, largely due to pressure from consumers.

“We use minimal intervention,” says Traas, “which is now the norm in horticulture – at least in Ireland – despite what people think. It is practically unheard of for tomatoes, strawberries or apples to be sprayed with an insecticide anymore. At the moment, we have large numbers of earwigs in the orchard which are controlling aphids. There are also significant quantities of predatory mites which control other more damaging mites. We put out pheromone-baited traps to catch moths, rather than spraying.”

Traas never actively introduced the beneficial earwigs or mites, but managed the orchards in such a way as not to harm them. “It can be hard in the first year or two to get them to build up if you have been using a lot of chemicals, but once they are established, they look after themselves unless you do something stupid to kill them.”

Apple growing is no easy option; it would take enormous effort to train Ireland’s beef and dairy farmers to convert to fruit production. Long-term financial investment in land, trees and equipment is required, plus training and education.

“There is good reason why Ireland currently imports apples,” says Llewellyn. “They are cheaper to produce in warmer countries, and the huge scale allows multiples here to get whatever variety and size they want. That said, two centuries ago Ireland’s orchard acreage was many times greater than what it is today and it stands to reason that the country would benefit from more well-trained, knowledgeable growers, located in the right soil and climate combinations, near to markets producing local fruit. People buy apples from me mostly because they are fed up with the bland, tasteless imports in the shops. And there is no reason why my model couldn’t be repeated nationwide.”