Review: This ambitious secret-garden cafe combines history with a glimpse of a better future 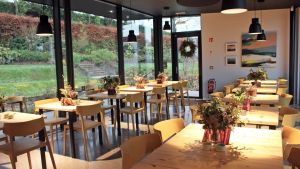 Good Day Deli is in a timber and glass building that manages to look Japanese, then Scandinavian, then Irish with its black finish like a currach. The cafe sits in Cork’s most hidden garden on the hilly grounds of Nano Nagle Place. Even after you wander through the gift shop and climb lots of steps, the cafe still feels sunken down from the top road that runs behind its high wall. Nestled is the word that comes to mind, as well as magical. Here’s a place where photographs tell only part of the story.

The days of eating outside are dwindling unless we morph into hardy Parisians who sit outside in freezing temperatures wrapped in blankets and sunglasses. But this afternoon is one of those gift days when the outside seats are all everyone wants. I take a seat inside at the simple wooden tables with their curved back mustard coloured-chairs and wait for my turn outside.

Even inside there is a garden feel to everything. The flowers on the tables are the cheerful burst of late summer sunflowers, marigolds and feathery blue blossoms that you would pick from your own garden if you lived in a Sally Hughes children’s story illustration. They’re grown in Cork without sprays, co-owner Clare Condon tells me.

They are just one of the many touches she and her partner, Kristin Makirere, have put lots of thinking into as part of the sustainable ethos that drives this cafe.

Caring too much about sustainability and the world outside your walls translates to overpriced mush with a side order of piety, sceptics say. Not here

Those who are sceptical of the knit-your-own-keep-cup tribe will tell you that earnestness in restaurants does not lead to the kind of food thrills that the slash-and-burn chefs brigade can bring. Caring too much about the world outside your walls and sustainability translates to overpriced mush, they say, with a side order of piety.

And yes, there are places where you have to forget the flavour and feel the virtue, but Good Day Deli is not one of them. Its two most popular dishes are its burger (it’s lentil) and the only non-vegetarian dish, the Kai Moana fish tacos.

The tacos are on the menu so Good Day Deli doesn’t exclude anyone who feels a vegetarian meal is not a meal. They look like regular proper tacos, served on proper Blanco Nino (White Boy) corn tortillas rather than the wheat tex-mex impersonators. These are topped with feathery mizuna leaves, coriander house mayo and the zing of house pickled red onions.

But the difference here is they’re made with hake so fresh off the boats in Ballycotton they’ve got none of the rubbery finish you expect from a battered piece of fish. Instead, they’re flaky and barely solid, held together with a light batter flecked with black and white sesame seeds. This is taco fish you need to wrap in a sturdy corn blanket so it doesn’t disintegrate under its own freshness.

There are skin-on paprika chips on the side. This enamel cup is filled with plenty of chips that are almost more nutty crisp skin than chip in places, and all the better for that. There’s a house ketchup that tastes like a tomato glut turned into a sweet autumn staple.

My beetroot hummus is a cerise purple so saturated with colour it almost glows. The beets retain their sweet earthy flavour and there’s a background lick of chilli heat in this to lace the sweetness with fire. Here’s a beet hummus to dip your chips in for a different kind of spice bag effect.

I couldn’t look a raspberry in the face for most of my teens. They tasted of tedium and the labour of picking them from the summers when we grew a field of raspberries at home. Our black Labrador was a fruit-picking machine, sucking them off the canes if he was let loose, his lardy haunches knocking off any he’d missed in his wake. As far as I was concerned, he was secretly welcome to them. It meant fewer for me to pick.

My dessert has a couple of the juiciest raspberries I’ve eaten, alongside a financier muffin, delicious, nutty cake with a custardy middle, topped with scorched Italian meringue

My dessert has a couple of the juiciest raspberries I’ve had since then, alongside a freshly baked financier muffin, delicious, nutty, dense cake with a custardy middle, topped with scorched Italian meringue.

The raspberries come from Rosscarbery. It’s the first time fruit growers Bushby’s have grown raspberries (they’re 30 years in the strawberry game), I discover in a follow-up phone call to David Bushby. Those were probably the last of this year’s crop, he tells me. I was lucky to get that reminder of a flavour I didn’t know I’d lost.

Good Day Deli is full of these kinds of connections with Cork’s plentiful supply of gardeners, growers and makers. There’s the woman who wove it a lampshade from willow and bark in her garden, and the local pottery. Almost everything connects to another story.

Our cultural centres don’t always put food culture front and centre. Nano Nagle Place has a heartfelt and ambitious cafe in its secret garden, grounding a place of historical interest with a glimpse of a better food future.

Lunch for one with coffee, tea and dessert came to €33.65